April is a 16 year old singer/songwriter. She started uploading covers on YouTube 2 months ago, and has also got some original songs up 'Black & White' and 'Candle'. They are both stunning showcases of her sound.

1. How old were you when you when you started getting involved in music and how?
I must of started getting into music from quite a young age. We had a karaoke set at home so from about 2/3 years old I sang karaoke ALL the time - you couldn't get me off it! I really began getting into music when I was 4 and joined my first school talent show and ended up going on it every year at my primary school until I left. I didn't play any instruments seriously until I was 14 when I picked up the guitar.

2. What was the first concert/gig/festival you went to?
I haven't really had the opportunity to see many artists and I can't remember exactly what my first concert was but I certainly do know my favourite gig, and that was Lewis Watson's gig at Sound Control 10th June 2013. So not that long ago but I have to admit I was absolutely mind blown.

3. What have you been listening to lately?
Passenger, Lewis Watson, Lauren Aquilina and Laura Marling.

1. What was one of the first albums you bought?
I never bought any albums myself when I was younger, so the first album I bought with my own money has to be Ryan O'Shaughnessy. He's just too perfect!

2. Where do you hope to be in 3 years time?
In 3 years? I hope to be gigging around full time really (it's a lot to ask for isn't it - typical me). I really hope to have my first EP out and just to be loving what I'm doing (whatever that may be - fingers crossed it's music!!)

3. When you wrote 'Candle' what came first - lyrics or melody?
Lyrics. It normally is lyrics although the melody almost comes immediately after. I always think of lyrics at the oddest times - they just seem to pop into my little brain when I least expect it!

Any other things you'd like to share/say?
Unfortunately, I don't have any albums, EPs or any professionally recorded tracks as it is but I really hope and plan to have those things eventually. For the mean time I post videos on YouTube, normally covers, although you will hear some originals (if I'm feeling generous). Please do subscribe to my channel, like my Facebook page and follow me on Twitter if you like - I really do appreciate it.

All my love, April xo

Lucy Spraggan's single 'Lighthouse' was written by Spraggan, James Flannigan and Preston (The Ordinary Boys). The song has peaked at 26 in the UK Singles Chart, it's the first single from her new album due to be released in September 2013.

'Talk To Me' is from Lauren's second EP 'Sinners'. Lauren is an unsigned artist that is currently sat at #4 in the iTunes Main Album Chart... 'Sinners' the single from Lauren's EP is also the free single of the week on iTunes... 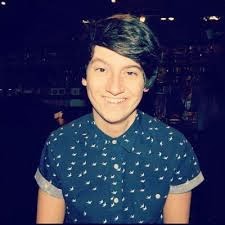 Jamie is an 18 year old singer/songwriter. He has been uploading covers on YouTube for just over a year and has recently been sharing some of his original work too.

1. How old were you when you started getting involved in music and how?
I was about 15 when I started playing guitar, I had to take it up for Music GCSE and I didn't want to sing (IRONY), or couldn't play anything else. And then in my second year of GCSE's we had to compose a song, so that was how I first got into writing.

2. What was the first gig/concert/festival you went to?
The first concert I went to see was Paramore on their Brand New Eye's Tour, not long before they officially split up. But I'm going to see them again later this year, ahh nostalgia!

3. What have you been listening to lately?
A lot of upcoming artists and some of my favourites, such as: Gabrielle Aplin, Saint Raymond, Layla, Matt Corby, Lewis Watson and Frank Hamilton.

1. Who is your favourite artist/band to cover?
It has to be a three-way tie between Gabrielle Aplin, Lewis Watson and Bastille, I've covered these guys a few times on my YouTube channel.

2. What process did you go through whilst writing 'Give Me All Your Love'?
Well, it was one of the more random urges I've had to write, it was quite late. I had a really bad throat at the time, and could barely talk. So I headed over to my keyboard and started playing some chords, and some how managed to get a good enough rough recording for me to remember by the time my voice was better.

3. Where do you hope to be in 5 years time?
Well, I would definitely hope to have released an EP of my own, if not more than 1! I also hope to support other artists on their tour dates as that looks like loads of fun and continue to build a fan base and share my music!

What is your favourite film? (from Maria)
Oh, that's a tricky one! It changes all the time, but I recently watched The Impossible and that was brilliant! And no one can deny the Harry Potter series!  Also, as a little side note, I'm looking forward to watching Catching Fire, when that comes out!

Any other things you'd like to share/say?
Thank you for your lvoely questions, I hope to be making more developments on my Debut EP in the not so distant future, so it would be great if you kept up-to-date on all the latest at my various sites. Additionally, I regularly post covers and some originals on my YouTube channel too! So here they are, see you all there! :)

'Love Me Again' is the debut single by British soul singer and musician John Newman, from his upcoming debut studio album. Newman's vocals have appeared recently on Rudimental's tracks 'Feel The Love' and 'Not Giving In'.

After the success of her debut EP 'Fools', Lauren returns this year with her second EP 'Sinners' (available to pre-order now, released on 22nd July).
This performance of 'Irrelevant' one of the tracks on the EP, was recorded at Bush Hall, including strings this live version is rather mesmerising.

'Toxic' was originally by Britney Spears and released in 2004. Rhett (one half of this cover) has been uploading videos on YouTube for just under 4 years. One of their most recent videos (a cover of Taylor Swift's 'I Knew You Were Trouble') has been their most popular, nearly hitting a million views on YouTube...