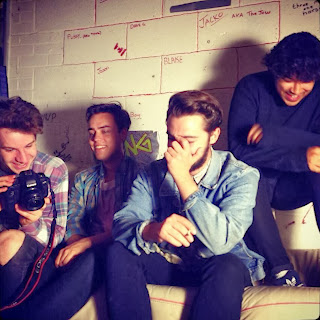 Bambi are a new London based indie band. Having been together for only 7 months, they've already supported Tom Odell, Professor Green and Mark Ronson on the main stage this year at Brownstock Festival. They've also played with Family Rain at Walt Disney's official premier party for The Lone Ranger and have self-released their first track All Along. They've got a constantly growing online fanbase, they've been growing and going forward at a rapid speed, and they don't plan to stop!

1. How old were you when you started getting involved in music and how?
We've always been really into music but we didn't really pick up any instruments until we were in our early teens...

2. What is the most inspiring gig/concert/festival you've been to?
We haven't been to many gigs as a collective but for James it was seeing the Maccabees at Brixton Academy in 2009.

3. What have you been listening to lately?
A lot of 90s is in the mix at the moment, bands like Slowdive, Radiohead and Weezer, they're the geezers. Been listening to Mac Demarco too, they're pretty.

1. How was the band formed, were you friends before?
We all knew each other from our home town and eventually regrouped in London, it still puzzles us how we became a band.

2. What process did you go through writing 'Reap from the Dying Love'?
We wrote it at home like most of our songs and used GarageBand on an iPhone to make a rough recording of it, technology ay? We took it to rehearsals, played around with it a bit then took it to the studio with our magical producer Chris... He's pretty dreamy.

3. People have compared you to 'The Temper Trap' and 'Echo and the Bunnymen', who influences you musically?
There's too many artists to mention and our influences are always changing, hearing those comparisons is strange as we aren't really influenced by either of them. Each member has different musical backgrounds and that's what makes it all come together.

1. Where did the name Bambi come from? (from Lailana)
We love venison.

2. Is your songwriting process collective or individual and how does it work? (from Tracy)
If all of us don't write a song together collectively it's almost like a roast without gravy... and we lurvvee gravy.

Any other things you'd like to share/say?!
Our single 'Reap from the Dying Love' will be released on 17th November (tomorrow), you can find the stream of it on http://www.soundcloud.com/bambihq
iTunes link: https://itunes.apple.com/gb/album/reap-from-dying-love-single/id725207921

Reviews of 'Reap from the Dying Love' by Bambi

2. Evan: 5/5 - nice vocals and instruments makes it a foot tapping song, had it on repeat, can't wait to hear more from these guys!

3. Lucy: 4/5 - 'Reap from the Dying Love' has heartfelt lyrics coupled with a sound that is both wonderful and chaotic all at once. It definitely pays homage to the past, but also displays a brilliant freshness that could lead Bambi to become just what the modern music scene needs.

Chart: Story of My Life - One Direction

'Story of My Life' was released by the group on 28th October this year and peaked at number 4 in the UK Singles Chart. It's the second single from their third studio album 'Midnight Memories'.


Story Of My Life - One Direction (link)

Live Performance: I Should Have Followed You Home - Gary Barlow & Agnetha Faltskog

The duet came together to perform their co-written track at Children In Need Rocks 2013. It was the first live performance for Agnetha in 25 years and I think it was a pretty good one to come back on! Maybe we'll see a regroup for Abba in the next few years?

I Should Have Followed You Home - Agnetha Faltskog & Gary Barlow (link)

'The Peaks' originally by alt rock/pop band Everything Everything from their second studio album Arc, which was released earlier in the year. Lewis Watson has joined forces with a few of his friends for his next EP and one of the tracks listed is this cover. If this cover is anything to go by the EP's looking like a good one with other songs from Hudson Taylor and Gabrielle Aplin.

Classic: It's Oh So Quiet - Bjork

'It's Oh So Quiet' was originally by American singer Betty Hutton, but being covered by Bjork and remains her biggest hit. It reached #4 in the UK and spent 15 weeks on the UK Singles Chart. In the UK the single has been certified as Gold, having sold over 400,000 copies.