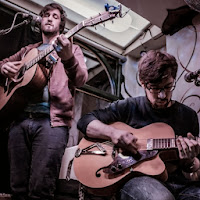 Alternative acoustic duo, Delve have been described as 'ones to watch' and I'd agree! Jack and Andy, originally from Dorset and Wiltshire, have quit their jobs and gone on tour. They are attempting to as many gigs as they can within 250 days, whether that be in a pub, studio, venue or just busking.
They've also released a debut EP, which includes three tracks for a name your price deal, which is also worth a listen!

1. How old were you when you started getting involved in music and how?
We both started playing music from an early age and were in various bands before we started Delve. Andy first took up the drums in Primary School, then moving on to guitar and Jack taught himself guitar from about the age of 16.


2. What is the most inspiring gig/concert/festival you've been to?
For me (Andy) it was Brand New at the Round House in Camden a couple of years ago. A band I absolutely love and the show was amazing. It made me want to go straight home and pick up a guitar and play. Bon Iver at Wembley Arena was pretty special too.


3. What have you been lsitening to lately?
As we have been touring the UK in our van we have a good CD collection with us. A lot of Hall and Oates and Simon and Garfunkel has been played along with some new albums we recently bought such as Ghostpoet, St. Vincent and Sufjan Stevens.

1. What is your usual songwriting process?
Jack will usually come up with a chord sequence or a set of lyrics and we will work from that point. We have a tendency to get happy with a song but not happy enough that we think it's finished so we will sometimes rip it apart and start all over again to see if we can create something better.


2. Where did you gain inspiration for your song 'Together'?
Together is about friendships, ambition and recognising the best in close friends.


3. How did the idea of doing 250 gigs in 250 days form and has it gone as you expected?
Jack came up with the idea of the tour. We wanted to do something different to other bands that just go on tour so we said lets challenge ourselves, be really ambitious and play any type of gig we can. This was so we could become better musicians, meet people, get our name out there as much as possible and also see the country that we live in! We didn't really know what to expect but have been to some awesome places and met some great people!


Favourite thing to see in the audience of one of your gigs?
Attention being paid. It's always great to silence a noisy room with our music and get people listening, there's something quite special about being able to do that with music, especially if you're playing it!


Reviews of 'Together' by Delve:

'Happy' from the Despicable Me 2 soundtrack is written, produced and performed by Pharrell Williams. It has gained attention because of it's title as 'the world's first 24-hour music video'. It's nice to see a neo-soul in the charts amongst pop tracks and it's just a general feel good track.

Jessie J took to the London Palladium's stage to perform 'Thunder' to a full house and Prince Charles and Camilla. It was a pretty flawless peformance that allowed her to show off her vocals and her third song from her second album. It echoes one of her songs 'Laserlight', but is still a good song and a solid performance.

Tompkins & Grimmie, both well known on Youtube, collab to create a catchy mash up of two great songs. Mixing 'My Songs Know What You Did In The Dark' and 'Girl On Fire' to create this showcase of both talents creates a pretty insane cover. It shows their musicality but also makes it impossible to not sing along.

This is more a suggestion of a channel, for people that like remixes, mixed chill and lighter 'dance' music. I've discovered a few channels on Youtube that share a variety of remixes by a variety of different people, it's a good mix and it's a good way for them to get heard. However, I heard this remix recently and have fallen in love, Kygo has done some great remixes but this one really stands out to me, it's a great one to chill out to!