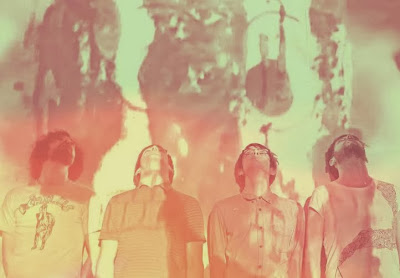 Ed Zealous, electro/indie band, from Belfast, made up of four guys, Steve McAvoy, Andrew Wilson, Pete Lloyd and Paul Irwin. So far, their music has been supported by Fierce Panda/Fandango, BBC Radio 1 and BBC 6 Music. They've supported Two Door Cinema Club and and have shared the stage with Wonder Villains. Their upcoming single 'Diamonds For Eyes' is out 20th January and their debut album 'Wired' is out on 3rd February! I asked Andrew, guitarist in the band, some questions, and here's his answers!

1. How old were you when you started getting involved in music and how?
I started to play the violin at about 8 or 9 in primary school. Got my 1st taste of stage fright at grading exam in a church hall in front of a panel of scary old ladies. I had to recite a whole piece on my own. I was killing it in practise but when I saw the panel I could only muster one long very shaky note and a few squeaks before walking off in shame. Awful stuff. I bet someone had a good laugh. Best getting that stuff out of the way early.


2. What is the most inspiring gig/concert/festival you've been to?
That's nearly as crazy as trying to answer what's your favourite song or colour. So to avoid a stupidly long pause I'll say that the last time my heart was in my throat and jaw on the floor was the last time I saw Arcade Fire in the O2 in Dublin. Just after 'The Suburbs' came out. It was a magical night - big group of friends, we had to battle through a snow storm from Belfast, and knee high snow in Dublin City. The atmosphere was electric, the sound perfect, the performance intense. I had an unshakable feeling that I was watching something that really reflected a moment in time. I remember thinking sometimes what it would have been like to see someone like 'The Stones' or something right in their time when it made sense - and this I thought was what it might feel like.


3. What have you been listening to lately?
Big albums in the past year, David Bowie and Foals. Listened to The Naked and Famous album today which is nice. Was really getting into an album called 'Interiors' by Glasser, which is like a more ambient, experimental and electronic version of St. Vincent. I have had the new Zachary Cale album playing a lot for some more folksy acoustic noise. I also got really into a weird album by Connan Mockasin called 'Caramel'. His intention was to record an album which was the actual sound of caramel from start to finish. He succeeded. I can't tell whether it's genius or awful. I think it's a guilty pleasure.

1. Your debut album, 'Wired', is set to be released 3rd February, which 3 tracks are you most excited about?
Well, we've put out the singles and I am really excited to play some of the real bangers to an audience that has now heard them. I want to play 'Telepaths' to a sweaty club full of lunatics. I am interested to see the reaction to songs like 'Videohead' which no-one has heard. It started as the slowest song and ended up as the fastest and most chaotic. It's so typical of our excitable writing procedure and it didn't have the benefit of being edited over time as it was a late comer, but I think it's more fun for it. I am still left with a feeling of 'Uh What?' when I listen to it. I'm also a big fan of Steve's lyrics in '147'. Sometimes, he does this kinda innocent but triumphant thing which makes me smile. I hope it does that for some other people too.

2. You've had some great experiences so far, but what has been your highlight so far and why?
I think our trip to play Glastonbury was one of the funnest things we've ever done. We hadn't released anything much, were a little wet behind the ears, and had one eye on doing the business and one eye on having fun. It was successful on both fronts.


3. What process did you through whilst writing and producing 'Diamonds For Eyes'?
Yea, that one was strangely difficult, despite its simplicity. In fact we nearly imploded writing it. It went through so many stages musically and lyrically. It was a lot longer for a while because of that too. I am so pleased with the result though. I remember getting really excited when we decided to trim it down and consciously make it into a pop song. It was a lovely feeling to see the home straight with it. I remember one hilarious incident right at the end just before recording it where we honestly had a one hour long standoff squabbling over something like half a bpm faster or slower. All kinds of bribery and politics went down over the half a bpm. I can't even remember who won. Bloody perfectionists.

For people that haven't heard your music, how would you describe your sound in 5 words?
Hyper Intense Electro Infused Pop - 'Wired' for short.


Reviews of 'Diamonds For Eyes' by Ed Zealous:

1. 5/5 - Philippa: a tune and a half, love the video as well!
2. 5/5 - Tracy: musically loved it, great upbeat getting-ready to go out type track, however I personally found the video distracting.
3. 5/5 - Evan: love it, has a Biffy Clyro tone to the singing? Had it on repeat!

'Budapest' by George Ezra, is currently at #8 in the iTunes Singer/Songwriter Chart. The 19 year old who is growing in popularity and is highlighted as a key 'new' artist for 2014. His EP 'Did You Hear The Rain' is at #4 in the Singer/Songwriter Albums Chart as well. He has performed at Glastonbury and I'm sure there are big things ahead of him this year.

Ella Eyre, well known for her vocals on Bastille's mash-up cover of 'No Angels' and Rudimental's 'Waiting All Night'. The 19-year-old came runner-up in BBC's Sound Of 2014 award and has been nominated for MTV's 'Brand New For 2014' and Brit Awards 'Critics Choice', all good signs for the young singer. Here she is performing her title track from her debut EP 'Deeper', enjoy!

The Vamps, have recently made it into the charts, and have grown in popularity over the last year. They've also been picked as MTV's Brand New For 2014 list. They formed in 2012 and have already won 3 big awards. They've supported Selena Gomez, McFly, and have been announced to support Taylor Swift and The Wanted on their 2014 tours.

Can We Dance - The Vamps (link)