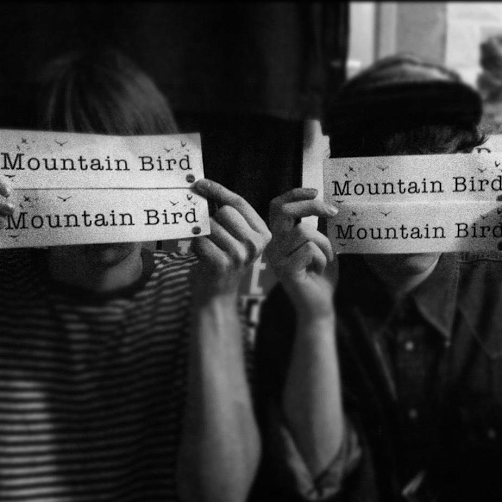 Mountain Bird, an alt-post-indie-rock band, led by Adam Ohman, songwriter, arranger and producer from Stockholm. Influences of Sigur Ros, Bon Iver and James Blake, with an original twist on a dreamy and haunting atmospheric sound. Their debut single 'Don't Mind' is out 26th January (2014) with support from Dermot O'Leary and BBC Radio 2, it's set to get a great backing over here in the UK. I asked head of Mountain Bird, Adam, some questions whilst he was in the studio, here are his answers!

1. How old were you when you first started getting involved in music and how?
My first ever contact with music was when I was 6 years old and got a glimpse of my fathers vinyl collection. I used to ask him to put records on then I just sat there and listened... Then it took 7 years for me to realise I wanted to make music. I got a record from my sister at Christmas when I was 13 years old, 'The Earth Is Not A Cold Dead Place' by Explosions In The Sky. I completely isolated myself for a whole weekend as I got totally blown away by the melodies. I didn't know music could be this beautiful. My sister had a big TAMA drum set as well so when she was outside I used to practise on it for myself... Then I bought a guitar and on it went... I needed some place to vent because of my anxiety and panic attacks I've had since I was 13, so it kind of came naturally...

2. What is the most inspiring gig/concert/festival you've been to?
I can list my top 3.
1. Sigur Rós in Malmö this gig was actually the latest gig I attended, in November to be precise. I finally got to see the band who made me tattoo one of their album covers on my arm..
2. Bon Iver in Stockholm, this show was absolutely breathtaking. Justin Vernon is a big inspiration of mine and I'll never forget that winter night.
3. James Blake in a church in Gothenburg during the Way Out West Festival. James Blake in a church, do I need to say more? I've seen this English guy twice, lots of people say we kind of look a like and actually 3(?!) people mistook me for Mr. Blake when I saw his show in Stockholm.

3. What have you been listening  to lately?
When I'm not too tired from hearing the same track all day from mixing my next single.. I've been listening to a lot of I Break Horses, they are a Swedish dreamy project who actually supported Sigur Ros when I saw them in Malmö. Really interesting and inspiring soundscapes right there.

1. Your sound resembles the likes of Sigur Ros and M83, who inspires/influences your music?
Lots of things inspire me, not only people and music. It could be films, art shows and strange haunting thoughts at 4am... But I'm always trying to write music I would listen to myself and write about things that hurt too much to keep inside me. Like the questions of what will happen with after all this or a massive sorrow you can't even talk about. Like a really serious diary almost.

2. Who would be your dream person to write/collab with and why?
I would love to collaborate with James Blake because that would look funny on stage.. But yeah, I guess a collab with Jonsi would be something else huh.

3. What process did you go through writing and producing your single 'Don't Mind'?
'Don't Mind' started in my apartment on my piano. I found the chords at first and then started singing and got the verse melody pretty quickly, almost in 10 minutes. After that I started my Logic and recorded the verse, I then realised it was going to be a long night. I had the sketch ready to record in a big studio in almost a week of time. Recorded it in MFG-studios in Stockholm and then made the final touches in my own studio, like the vocoded vocals and stuff.

If you were stranded on an island - what 3 items would you want with you and why?
Ahh, a classic!
1. I would bring my mother so she could quit worrying so much.
2. A drum set because I can't play any drums in my apartment.
3. The last thing is some kind of animal, a pet monkey would be neat!!

British group Clean Bandit, have made it to #1 in the UK Singles Chart, only a couple of days after being officially released. This track is the third single from their upcoming debut studio album and in December 2013, was featured as (Radio 1's) Zane Lowe's Hottest Record in the World. Jess Glynne features on the track and is set to be a big hit this year, with another track she features on being listed as one to listen to by Zane Lowe.

This week's live performance comes from Kate, Carl and Daniel, who make Meadowlark. They've been sharing demos of tracks and they all sound really good, and have a dreamy, chilling kind of sound, with an EP on the way, they've already got a fair bit of backing from fans, and when it's released I'm sure it'll be talked about in the musical world.

Ben Howard manages to make any song his, he's done many well received covers, including 'Figure 8' and 'Video Games', both of which, I highly recommend you listen to! Call Me Maybe, originally by Carly Rae Jepsen peaked at #1 in the UK Singles Chart, many well known artists have covered the track, including Katy Perry, Kelly Clarkson and Big Time Rush, but to me this one stands out by a mile!

A few weeks ago, I was walking along the Southbank in London, and came across this wonderful street performing singer/songwriter on a very cold day. She was singing a great cover of 'Let Her Go' and when I got home, I immediately took to Youtube to listen to more of her covers and original songs. I found out she's got a debut album out, which is a great album to chill to, here's an original track, enjoy!

On The Southbank - Charlotte Campbell (link)