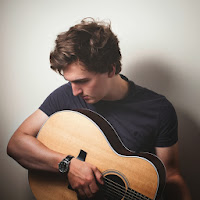 Oliver is a 19 year old singer-songwriter, based in Essex. He's released two EPs, and a debut album 'The Boy Who Fell'. He gigs as much as he can to get his music heard and hopes to start touring very soon. With an easy listening to tone to his music, he's built up a pretty impressive fanbase.
He's played at festivals to hundreds of people and there's big things to come from this guy!

1. How old were you when you first started getting involved in music and how?
I first started playing guitar when I was 7. It began with lyrics for me. I would always string words together in order to try and create some kind of song or poem and so on my 7th birthday my parents gaev me a guitar which enabled me to put some music to the words. And I guess that's where the songwriting began.

2. What is the most inspiring gig/concert/festival you've been to?
It's hard to pinpoint a specific answer to this question. I think one of my best feats is that I am quite easily inspired by everything. I like all types of music and therefore never approach a song with a close minded attitude. I think the standout momnets in my life when I felt truly inspired were all watching videos of live concerts... First one, I am ashamed to say was Robbie Williams live at Nebworth. Then Green Day, American Idiot. And finally, John Mayer's Where The Light Is. I have been to many inpsirational live gigs, however these three moments seemed to have had a particularly big impact.

3. What have you been listening to lately?
Lately, I have listened to quite a range of music.Some John Mayer, some James Vincent McMorrow. A little bit of The 1975 and some Jeff Buckley too, which my neighbour has reintroduced me to.

1. What comes first when you write songs (lyrics/melody etc.)
Lyrics. Almost always. Though saying that, I did just write a song starting with the music. But usually it's lyrics. I can't write a songwithout a story. And the stronger the story the better the song. And by story, I don't necesseraily mean a conventional beginning, middle and end. Just a foundation of emotion which you then use to fuel the song.


2. What is your motivation to stay and work in the music industry?
I absolutely love music.


3. Where did you find inspiration for 'The Boy Who Fell' album?
The Boy Who Fell, the title track itself is about an old friend. I won't go into too much detail. But it's about the unfair pressures in life and what it can do to people. The rest of the songs are about various things. Some central to me, some central to others, but always about situations or experiences which have just had an impact one me.

If you could be a musical instrument what would you be and why? (from Tracy)
That's a pretty hard question. I'm thinking that if you were clever about your answer, you could probably end up having a life long massage. But then, you could also just end up being smashed in the face, eg if you were a drum. Tricky. I can't imagine life is too pleasant for any instrument if I'm honest. I'd probably go for a violin though.Violinists take care of their instruments and there's no heavy wear and tear.

This track is from Swedish DJ & Producer Avicii, featuring uncredited vocals from American singer Dan Tyminski. After spending several weeks climbing the UK Charts, it peaked at #2 in the Singles Chart and #1 in the UK Dance Chart.

Matt Corby, an Australian singer-songwriter and musician, runner-up on series 5 on Australian Idol. Having released 5 EPs and growing in popularity, Matt Corby's latest single has been his biggest and most widely recognised. Here's a live performance from his tour in August 2013.

Hannah Grace, a 20 year old singer-songwriter from Wales, covers the classic Etta James' 'At Last', flawlessly. With such a mature sound, this is a stunning cover. (She's also currently recording her debut EP at the minute! So keep your ears tuned for a folky/soul set of tracks from her!)

Kina, an American guitarist and singer-songwriter, won the Doritos Crash the Super Bowl contest, and earned a recording contract with Interscope Records, she's also won a variety of other awards too. She has grown in popularity in recent years, and is well-known for her covers on Youtube as well as her originals and collaborations with others. (I suggest you check out her 'Sweater Weather' cover too!)