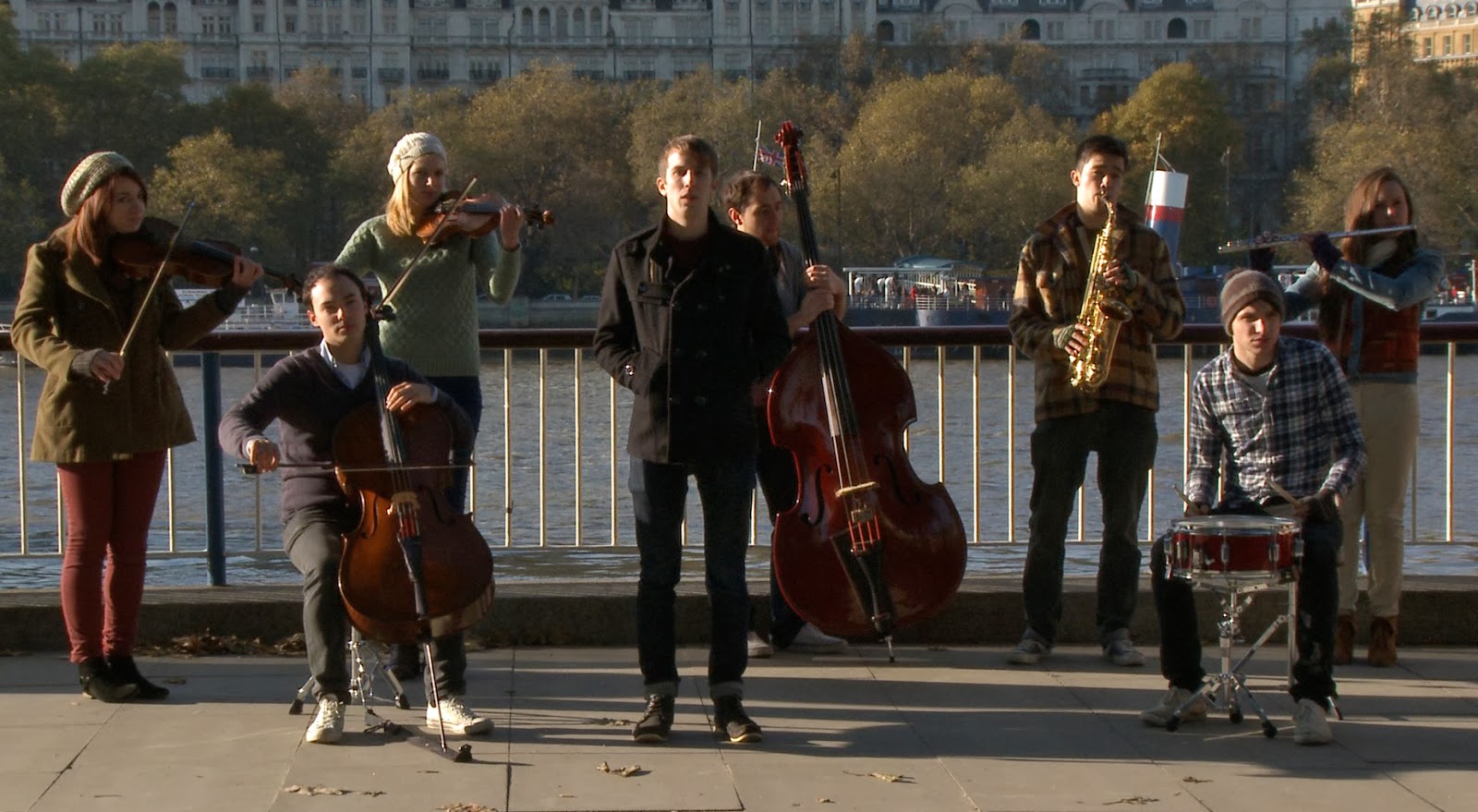 Sea Stacks, created by Davy Berryman, use orchestral instruments to produce wind and string filled indie music. Starting with a few songs and a studio, Davy started with one rule no pianos or guitars were to be used. April 2013, saw Sea Stacks release their first single 'The High Tide', then a follow up came in September 2013, 'Numb'. When performing live, Sea Stacks perform as an eight-piece, featuring a string quartet, double bass, flute, drums and a harmonium.

1. How old were you when you started getting involved in music and how?
I started music lessons properly when I was 8 or 9, through the local music service in school. I had lessons in flute and piano, but it wasn't until much later in my schooling that I really got into popular music, taking up drums and guitars when I was 15.

2. What is the most inspiring gig/concert/festival you've been to?
Back in 2010 I saw Jonsi at The Forum in Kentish Town. Sigur Ros have always been a band I've loved; I've seen them several times and their live shows have always been spectacular but Jonsi's solo was something else. The theatre of it was amazing, such stunning 3D projections.

3. What have you been listening to lately?
Just recently a lot of Keaton Henson. I was introduced to him a year ago, but only just really gave it a proper listen. Otherwise bands like Efterklang, Frightened Rabbit or Sigur Ros are nearly always in the mix.

1. Starting with only one rule 'no guitars and pianos', how has Sea Stacks and your music grown?
That rule is not really as strict as it sounds. I started with that in mind to provide some sort of boundaries to my ideas, but really I expected to break it. So far I've only used a few tiny hidden bits of guitars in recordings to add some weight and now I rarely think of using them, though I do write on piano or guitar.
Initially, it was a lot of experimenting, seeing what I could create with the instrumentations, but as the project has continued and I develop a vocabulary the process has become quicker and the focus has changed. Originally, it was a lot of working out how to arrange my piano/guitar songs into this setup, but now I write at the piano already knowing what texture I'm going for.

2. You describe your sound as 'orchestral indie', but what inspires/influences your music?
To be honest, I don't really like the term, but you have to put yourself in some sort of box. I don't like the idea that instruments are tied specifically to a particular musical genre; that was part of the point of starting the project. They're just instruments which can be used within one style or another.
Influences always shift depending on mood and what I'm listening to at the time, but really the bands I mentioned earlier, plus the likes of Bon Iver, Radiohead and others often spark ideas.
Inspiration can be from anything though. Often it's just some small idea that comes on the train home and I'll write some lyrics and hum a melody until I'm able to record a quick demo.

3. What process did you go through producing 'Numb', musically and visually?
Numb's actually one of my oldest songs. I wrote the music years before Sea Stacks was an idea; just me in a room laying down lots of layers of synths and trumpet. It was huge! I'd always wanted to add some lyrics to it but never managed until a few years ago when I moved to London and began thinking about Sea Stacks.
Musically, I always wanted that wall of sound that hits in the choruses, reflecting the noise of the city and a person's struggle to deal with the continual mass of aural and visual information you are presented with when living in a city.

What is your favourite type of weather and why?
Well, right now I'm sat in my flat sheltering from the pouring rain and gale force winds, but I'd say that crisp coolness of early morning on a sunny spring/summers day. I'm rarely up early enough for that now!

1. 3/5 - Sophie: fantastic voice and lyrics but not my type of thing.
2. 5/5 - Tracy: loved the strings and voice complementing them, great easy listening, chilled time track.
3. 5/5 - Evan: really enjoyed this track, love the strings and vocals, make a stunning song.

'Selfies' is a track from Scottish singer/songwriter Nina Nesbitt. It was released over a week ago, 7th February as the lead single from her debut album 'Peroxide'. The single has peaked at #23 in the Scottish Singles Chart, but it finds itself in this section this week as the album has peaked at #11 in the UK Albums Chart, due to BRITs coverage on Wednesday, it got knocked down by artists and bands getting coverage.

Orla has just finished tour(la) around the UK and Ireland, and success with 'Roots EP'. This live performance is one of her most recent and popular covers 'Wannabe', originally by the Spice Girls in 1996, and was a massive hit! I'm sure you'll enjoy this and you have to wait til the last little bit for a nice drumming section on a watering can... insane!

Originally 'Goodness Gracious' is by English artist Ellie Goulding, from her re-release album Halcyon Days (which is a great album!) It peaked at #26 in the UK Singles Chart, and is due to keep climbing! Natalie Holmes creates a simple but effective chilled out cover of the original dance pop track.

'Respect' is a song written and originally released by Otis Redding in 1965, however it is probably more recognised as a song by Aretha Franklin. It's been considered as one of the best songs of the R'n'B era. She has gained two Grammy Awards in 1968, with this track and it has featured on a lot of all time classics charts.