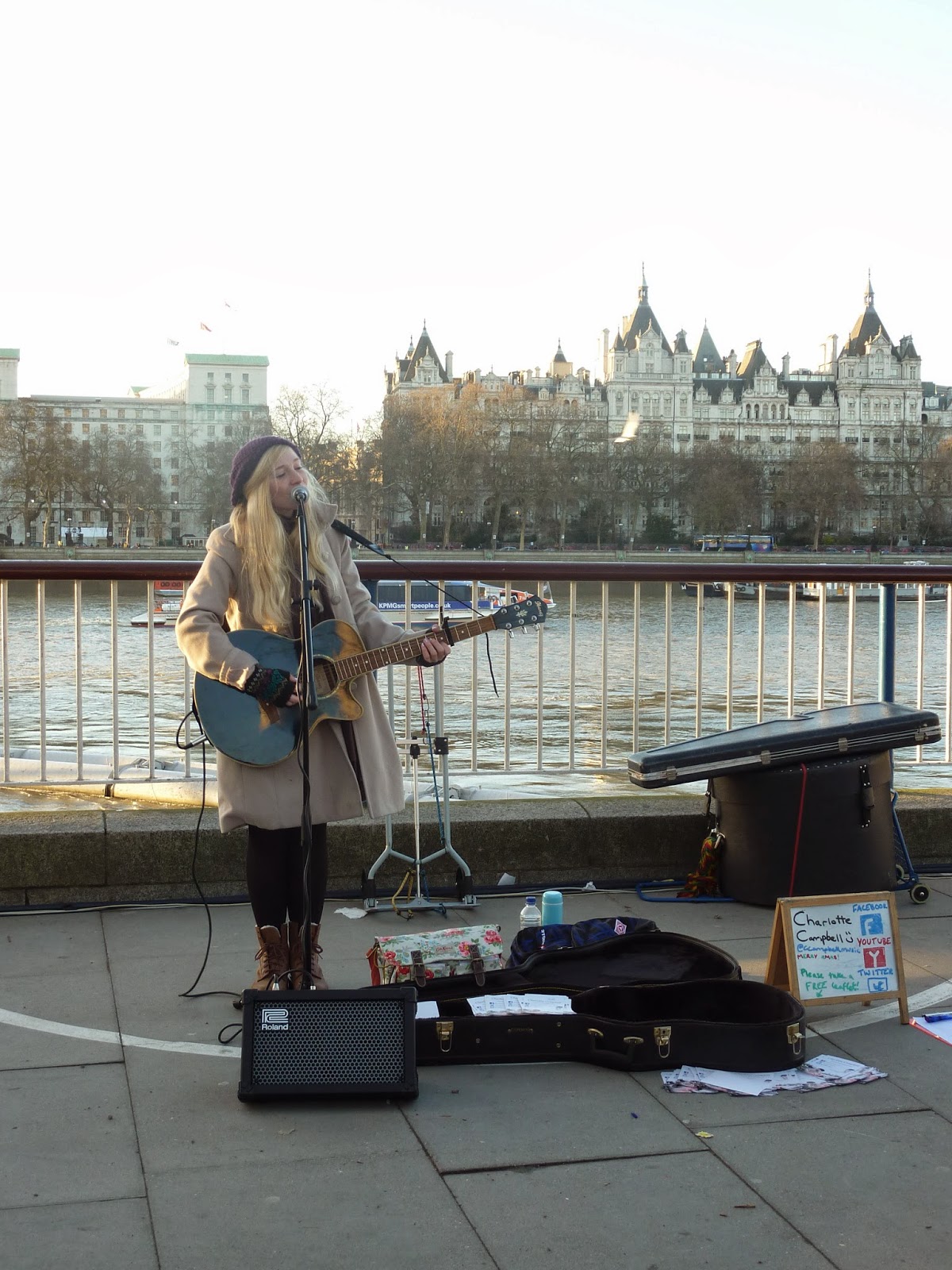 Charlotte is a singer/songwriter and street performer from London, you'll regularly find her busking on The Southbank in London. She is a graduate of BRIT School and with help of her fans, funded and released her debut album 'Blue Eyed Soul' via PledgeMusic. Charlotte also uploads regular videos to YouTube and has been uploading for the past 4 years.

1. How old were you when you started getting involved in music and how?
I was always singing when I was a child as my parents and grandparents love singing. But when I was 16 I started to play guitar and write songs - that's when I started to take singing seriously and I got into the BRIT School to study music, that was a big step into the industry for me.

2. What is the most inspiring gig/concert/festival you've been to?
I like big festivals and hows, but I find small, intimate venues most inspiring, seeing artist close up and witnessing raw talent. I saw Nizlopi play at Dingwalls recently and they played a few songs acoustically in the middle of the crowd, it was really magic!

1. Which do you feel most comfortable doing, recording, gigging or busking and why?
I don't really have a preference; I think the best part of my job is I get to do all three. Every day is different for me, so whether I'm gigging, busking, writing or recording, I'm enjoying myself!

2. You've had some great experiences in your musical career so far, but what has been your highlight?
My highlight so far was releasing my album 'Blue Eyes Soul' through PledgeMusic.

3. From your album 'Blue Eyed Soul', what are your favourite three tracks and why?
This is a really hard question! I love all the songs for difference reasons but here are my favourites at the moment!
'Feathers and Wax' - This is my favourite because I wrote it about the fears I had about becoming a full time musician and the realisation that you have to go for the things that you want, there isn't much else worth living for.

'My Old Bedroom' - I loved writing this because it was my way of reliving all the silly games I used to play in my bedroom and how much I have grown up.

'Runaway Judy' - I'm really proud of this track, as I always wanted to write something meaningful to empower women, as I really enjoy reading feminist literature and this song was inspired by 'A Room of One's Own' by Virginia Woolf.

If you could be any fictional character, who would you be and why?
I don't know if I'd like to be a fictional character because I'm really enjoying my life right now. But if I really had to choose I'd be the Hungry Caterpillar, purely for the cuisine.

Chart: She Looks So Perfect - 5 Seconds of Summer

'She Looks So Perfect' a song from pop rock band 5 Seconds Of Summer, from Australia. It's their debut single with a major record label and after having done really well in the Australian and New Zealand Charts, their track is now #8 in the UK Singles Chart.


She Looks So Perfect - 5 Seconds of Summer (link)

Here is Bon Iver performing their hit track 'For Emma', from their debut album, 'For Emma, Forever Ago' at Austin City Limits. This live performance just shows how much goes into their tracks and how good they can make it sound with so many layers etc. Enjoy!

Originally by Fleetwood Mac, 'Dreams' has been a hit throughout generations and has received many covers over time. Namely, Gabrielle Aplin and Bastille's cover gained a lot of attention. I came across this cover randomly, and felt it way too good not to share, so here it is! Enjoy!