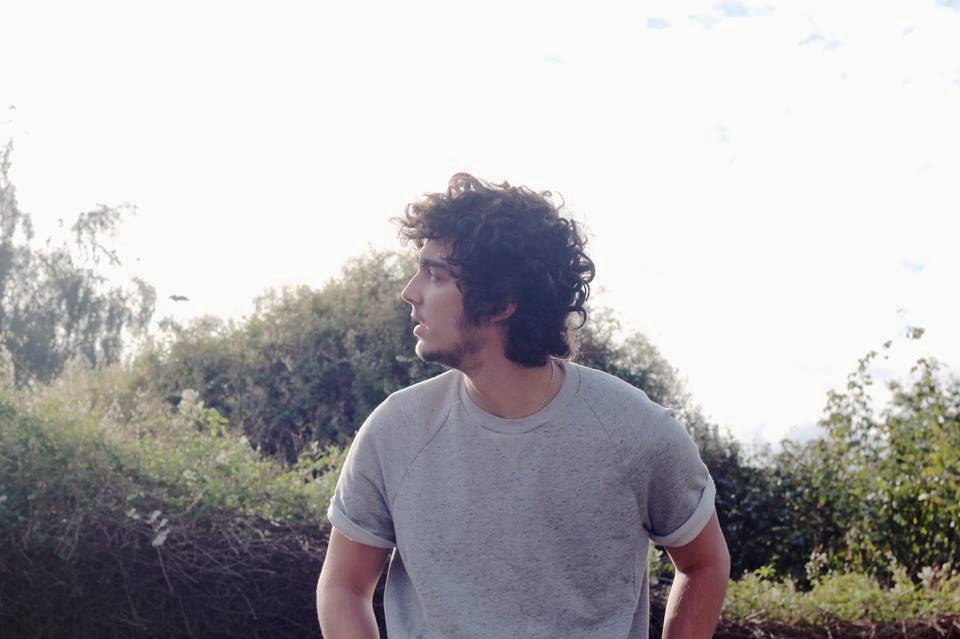 London based singer-songwriter, Dominic Wolf, uses loop pedals to control and affect his vocals and arrangements in a distinguished way. His upcoming single 'Behind The Sun' starts softly with an acoustic vibe, guitar and intimate vocals and grows into a well detailed and intense track. Drum-fills, increased reverb on backing vocals and expands into a powerful track. His debut EP 'Masks' is out on 16 March 2014.

2. What is the most inspiring gig/concert/festival you've been to?
That's a difficult question there have been so many inspiring gigs. I saw Bon Iver at Paleo Festival in Switzerland and that was very incredible, very inspiring. As for my favourite festival, it would have to be  Pukklepop in Belgium. Always has a great line up.

1. If you could invite any three people to one of your gigs, who would you choose and why?
I would invite the Dalai Lama, I think he might like what I do. In any case I'd be interested in knowing what he thinks of my music. I would not mind James Blake coming to one of my shows, see what he has to say about my music and maybe even jam, who knows? Lastly, Elliott Smith just because he has been quite a big influence.

2. You have a pretty unique sound with acoustics, harmonies and drum fills, how and when did you decide on your genre/sound?
I never really decided to go into a specific genre or style. It is just that as I played more and more music, I started having access to more and more materials and instruments to experiment with. It was a long process of self-discovery which taught me a lot and resulted in me making the music I compose today.

3. What process did you go through writing and producing 'Behind The Sun'?
I wrote the song approximately six months before recording, reworking it until I was happy with it. I then had the opportunity of recording it in Play Studios in Soho, London. I recorded it with producer James Arter, we really experimented with different sounds until we found what we wanted. It was a lot of fun as it was the first time I was able to record in a professional studio.

Reviews of 'Behind The Sun' by Dominic Wolf:

1. 4/5 - Tracy: liked the melodical tune with the upbeat twist in between.
2. 4/5 - Evan: love the acoustic start and building into the upbeat sections.
3. 4/5 - Sophie: relaxing and lovely tone.
4. 4/5 - Philippa: really nice tone to his voice and a relaxing song, quite an artistic video too!

Released on 2nd March (2014) as the second single from her forthcoming third studio album, 'Sheezus', 'Air Balloon' is climbing up the charts after entering at #11 in the UK Singles Chart. It's a really catchy song, and a true Lily Allen track.

Saturday Night Takeaway on 8th March (2014) saw McBusted perform against Ant, Dec, Keith Lemon, David Dickinson and Ashley Roberts forming as McDonnelly, as well as a surprise visit from Status Quo. Performing classics, it's not the best live performance, vocally, but it's a good laugh!

'Ain't It Fun' is originally by the American rock band Paramore, and was released as their fourth single from their fourth studio album. Here it is being covered by four growing Youtube sensations, enjoy!

Classic: You've Got A Friend In Me - Randy Newman

I was sat watching Monsters Inc. and reminded me of how much I loved Randy Newman's work. I'm a big Disney Pixar fan and Randy Newman's tracks in general, he's done a lot of popular film scores, James & the Giant Peach, The Princess & the Frog, and pretty much all the classic Dixney Pixar's, Monsters Inc. and University, Bug's Life and most notably Toy Story. Enjoy this feel good tune!
You've Got A Friend In Me - Randy Newman (link)