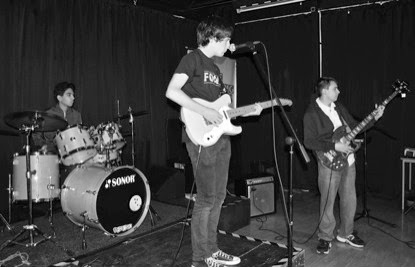 The Walking Method are an indie rock trio from the outskirts of London. Made up of William Dorey (singer & guitarist), Jacob Henry (drummer) and Matt March (bass guitarist). They haven't played much live yet, but that isn't stopping them from releasing good music and growing their fan base, with social media playing a key part in that. They are organising more gigs for later in the year and an EP release too. These guys are building a name for themselves, and they've even had a fan kicked out of their local Walmart on the other side of the world because they were spreading the name of the band! Crazy!

1. How old were you when you started getting involved in music and how?
We all got into music at different times really; Will was ages seven and was strongly influenced by his Dad, whilst I (Jacob) was about 10 when my Dad and Grandma got me into it. Meanwhile, Matt was about 13 when our secondary school music teacher Mr Wells helped him become involved.

2. What is the most inspiring gig/concert/festival you've been to?
Again, we've all been inspired by different concerts and  festivals we've attended. The best one I've ever been to has to be Arctic Monkeys at Finsbury Park in London a couple of months ago, whilst Will loved Reading 2012 and Matt was inspired by Fall Out Boy this year at Wembley Arena.

3 Questions for The Walking Method:

1. How did 'The Walking Method', the band and the name come about?
We all came together as a band after attending the same secondary school; Hall Mead and we performed for the first time at a school concert. Our name came about quite randomly actually; we were stood in a group with our mates at college preview where we were discussing what we should name the band. Then someone suggested the idea that we should get a book, open it and whilst blindfolded, randomly point to three words on the page; those three words would form the band name. The three words that were chosen were 'The', 'Walking' and 'Method', so there you have it!

2. When writing a song, is it a collective effort or are there specific roles within the group?
Our songs are usually written all by our lead singer Will, who is the creative spark and almost everything flows through him.

Favourite film and why?
We've all got different favourite films. My favourite has to be 'Hot Fuzz' because it's hilarious and Edgar Wright is simply a genius. Will's favourite is 'Submarine', because Alex Turner wrote the soundtrack and Matt's favourite is 'Batman: The Dark Knight' because it is very action-packed and reminds him of the characters he used to love during his childhood.

'Ghosts' is the second single from The Walking Method, I really like the chilled skater rock vibe of this track. The guitar and drums really hit into the indie genre, these guys fit with other upcoming band Renegade, and vocals remind me of early band OPM. You can definitely hear their influences of the likes of The Strokes and similar bands. The only negative is it seems a little messy at times, BUT these guys haven't been together for long at all and if this is one of their first songs, I'm looking forward to watching them grow and hearing more music from them!

They've also got a gig on Friday 3rd October 2014 at The New Windmill Hall in Upminster, London, in aid of Oxfam, tickets are available at: http://www.seetickets.com/event/the-walking-method/the-new-windmill-hall/798619

'Problem' has been released as the lead single from Ariana Grande's second album 'My Everything'. It features Australian artist/rapper Iggy Azalea, this feel good pop track has received lots of positive critique and is a real tune for summer. The track has peaked at number 2 in the Billboard Hot 100 and is currently at number 1 in the UK Big Top 40 Chart.

There is no doubt that Dolly Parton was a massive highlight of Glastonbury 2014, and definitely competes for Queen of the festival this year. Amongst other classic tracks, Dolly performed Jolene, which is known as one of the best songs of all time. She can definitely still sing as well, which is refreshing amongst the older music generation!

Cover: How Will I Know - Sam Smith

This heavenly cover has been a hit on the internet in the past couple of weeks, being shared and spread across the world via social media and the likes. Sam Smith manages to make every song his own, and he his a favourite artist amongst this blog. Definitely one of my artists of 2014. Enjoy!

How Will I Know - Sam Smith (link)

This is a school disco classic. A real feel good track that made polaroids popular. A great mix of funk, rock and pop, this track was a hit, the track was written and produced by Andre 3000. It peaked at number 3 in the UK Singles Chart and number 1 in the US Billboard Hot 100, and still remains to be a favourite amongst pretty much everyone! The video is also pretty great too!

Emma Slater, Emily Howell and Fredi Moore, you have all won two items each from the giveaway, please inbox me on FB for more information and a massive thank you to everyone who took part!