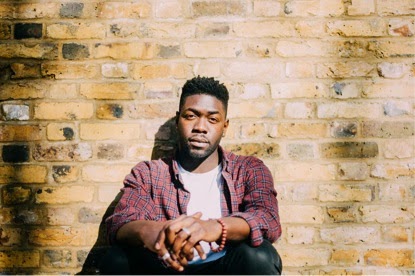 South London, singer-songwriter, Jake Isaac, has had a busy and successful year. He had an eventful summer touring, which included festival performances at Barn on the Farm, a slot on the Other Stage at Glastonbury and many more. He also supported Ella Eyre on tour and went on his own tour in Autumn. His latest EP 'War Child', went straight into the Top 10 in the iTunes Singer/Songwriter chart. 2015 is also set to be a big year for Jake.

1. How old were you when you started getting involved in music and how?
I was probably about five years old when I first picked up a pair of drum sticks. Actually, tell a lie... I probably picked up two wooden cooking spoons and had a blast on my mums cooking pots! It's been non-stop noise ever since really! Ha!

2. What is the most inspiring gig/concert/festival you've ever been to?
Most inspiring festival I'v been to has to be 'Barn On The Farm'! It was AMAZING! I had the privilege of playing there, but that was the first festival I blatantly told my mates I would PAT and come along as a punter easily! GREAT music festival!

1. You've recently been on tour, but where is your dream place to perform and why?
Ha! Don't really have one to be honest! Been REALLY privileged to play loads of amazing venues, I suppose I kinda take each gig as it comes.

2. Who would be your dream place to write/collab with and why?
Dream to would have to be Ray Charles... even just imagining his writing on guitar music BLOWS my mind.

3. 'Long Road' has a unique image, what songwriting process did you go through with it and how did you create the idea for the music video?
Songwriting wise Long Road was like a bit of a download, it just came! I'd hear a chord in my head, then hear the lyric that needed to go over it! That simple really. Even though I'd love to be able to say it was some technical exercise and sound all professional!
Video concept wise... it was literally finding what people and resources we had available at the time and making it all work, and bingo!

Five songs for a road trip?
Diamonds On The Soles Of Her Shoes - Paul Simon
Mexico - The Staves
Ain't Too Proud To Beg - The Temptations
Some Nights - FUN
Do You Remember Me - Jill Scott

This EP shows how varied the genre of Jake's music can be, every song has something different to give, yet they all have one thing in common, they're pretty amazing.
'Never Leave' which features Josh Record, has a stunning piano intro, which builds into strong vocals from Jake and Josh complimenting each other very well. The harmonies are on point and the song ends with a rush of sounds. 'War Is Our Name' is a catchy upbeat track which cuts to chilled harmonies at points, with beautiful guitar all the way through. 'A Day To Live' is another great song from Jake, with piano, solid vocals and harmonies, as well as an upbeat chorus, I can imagine this being a brilliant song to see him perform live. 'Hope' is a breathtaking song. The stunning piano and vocals create an emotive and honest song, this track also showcases Jake's lyrics as words to remember. 'Carry Home' has a chilled acoustic vibe, I can imagine it being played round a campfire on a summer evening, it also has a soulful vibe to it with Jake and JP Cooper's vocals feeding off each other too. 'Long Road' is the last track on the EP and it's one to finish a gig off on, it's catchy and upbeat song, which continues to build layers throughout... Have a listen below and I can guarantee your will be tapping!

'6 Words' is taken from Wretch's third album, 'Growing Over Life', which is due to be released in the near future. It's currently at #8 in the UK Singles Chart, after being premiered on BBC Radio 1 by Zane Lowe, who also made it his hottest record in the world.

Lorde took to the Live Lounge the other day to perform this cover of 'Don't Tell 'Em' originally by American artist Jeremiah, from his upcoming third studio album, Late Nights. I've had it on repeat and she definitely does the song justice live.

'The House of The Rising Sun' is a traditional folk song made popular by English rock group, The Animals in 1964. It became #1 in the UK, US, Sweden, Finland and Canada. Here is Greta Isaac covering this song with a pleasant and smooth twist.

Classic: I'm A Believer - The Monkees

This catchy track stayed at #1 in the US Billboard Hot 100 for seven weeks and #1 in the UK Singles Chart for four weeks. The song was composed by Neil Diamond and recorded by The Monkees in 1966, but has since been covered by Smash Mouth and Eddie Murphy in 2001 for Shrek. Enjoy singing along to this one!

I'm A Believer - The Monkees (link)