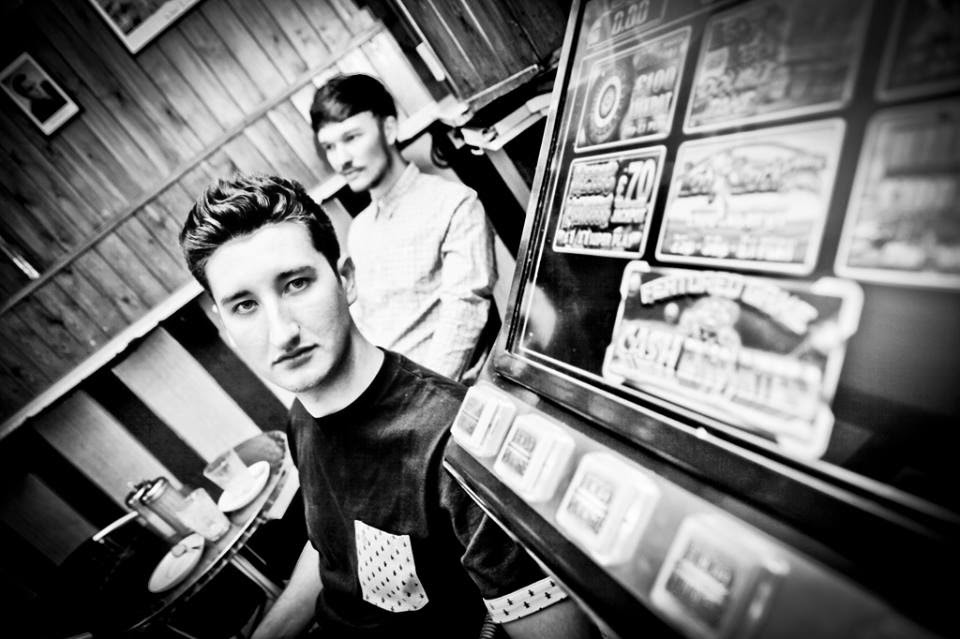 Alex Noble (vocals, guitars and keyboards) and Charlie Burley (production, samples, guitars and keyboards) formed April Towers in August 2013. However, they've already carved out a presence on the nation's airwaves, receiving support from BBC Introducing's Dean Jackson, as well as plays on Radio One from Huw Stephens and Fearne Cotton. They've even had a beer named after them, the Nottingham duo teamed up with Castle Rock Brewery to create the limited edition 'No Corruption Ale'. Armed with a new single, limited edition beer and a spot on The Great Escape and Dot to Dot Festival line ups, April Towers are set for a pretty huge 2015. I caught up with Alex for a few questions.

1. How old were you when you started getting involved in music and how?
Charlie and I started making music together around about the age of 16, when we were at school together. Arctic Monkeys had just broken into the mainstream and it seemed like all of my mates were buying guitars and essentially trying to be them, so we thought we would have a go at it too!

2. What is the most inspiring gig/concert/festival you've been to?
For me, the most inspiring gig I've ever seen was either Arcade Fire's headline performance at Leeds Festival in 2010, or LCD Soundsystem and Hot Chip, who did a co-headline tour in the same year at Manchester Apollo. Both shows really opened up my eyes to how important these bands were, and each was fundamental in how the April Towers project eventually came about.

3. Who have you been listening to lately?
For the last year or so I have been absolutely obsessed with the latest Cut Copy record 'Free Your Mind' - it's just a great pop album, perfectly orchestrated and measured. We are both loving the new Aphex Twin material as well as the latest Hot Chip track Huarache Lights and an act called Disciples who are getting a lot of love everywhere at the moment.

1. Where did the name 'April Towers' come from?
It's a random one - someone I used to work with was trying to say April Showers bring May Flowers and just got the expression completely wrong and blurted out April Towers - for some reason that expression just always stuck with me and seemed like a logical band name when we came to decide what to be called.

2. What inspires your lyrics and who influences your sound?
Lyrically, I have never been one to focus on what seems to the stereotypical approach - be it about love or girls or heartbreak or whatever - sure, there are elements of that in some of our songs, but I like it to hone in on what I am going through at that particular time - most of our records are about growing up and the transition from 'young' life to trying to make something of yourself in the real world - I think our first album will really pay attention to that theme, as it is something that everybody goes through, no matter where you come from.

3. What process did you go through writing and producing ‘No Corruption’ and was it different to previous releases?
'No Corruption' was a track I initially wrote in my bedroom at university in the Spring of 2014. The structure came pretty much straight away and we both had a distinct vision of where we wanted it to go - after a lot of work in the studio with Ade Fenton (and around 15 versions of the mix), we agreed on a final mix which we thought really brought the best out of the record. In terms of it being different to other releases - it was in the sense that it was the second single and we had already established ourselves in our hometown and more nationally do there was already an audience there. Also, we launched our own beer, No Corruption Ale with a local brewery (Castle Rock) in Nottingham to promote the release, which as worked really well and generated a lot of interest. No Corruption also be coming out on 12" alongside our first single Arcadia later this month, which will be a very proud moment for us being our first physical release.

Dream place to perform and why?
There are so many options for this - obviously we aspire to play the Pyramid Stage at Glastonbury (like any band) as well as some of the biggest venues in the world. On a sentimental level though, being able to headline Rock City in our home town of Nottingham would be a big personal milestone, so at this moment in time I'd have to say the dream would be to perform there.

This is the first track I'd heard of April Towers and since I first heard it, it's been on repeat and I'm looking forward to their future releases already. The song is lyrically very different to usual pop influences, but still very relevant, which is always a plus. But the structure of the track is what makes it for me, the synths, beat, guitars and vocals all accompany each other well and blend it neatly. When I listen to the track, it reminds me of 80s music, slightly more reminiscent of bands such as Depeche Mode and New Order. The music video also goes well with the track and it's a song that gets stuck in my head, so I'd say it's a pretty good one!

British folk rock band Mumford & Sons are back with their latest track 'Believe'. It was released on 9th March (2015) and serves as the lead single from their third album 'Wilder Mind', due to be released on 4th May. This single also shows a turning point for the bands sound, moving from acoustic instrumentation (banjos etc.) to a more electric theme throughout. Either way, it's still brilliant and making it's way up the UK Singles Chart.

'Giant Peach' is the lead single from Wolf Alice's debut album 'My Love Is Cool', set for release on 22nd June (2015). The four-piece alternative rock band, consists of Ellie Rowsell, Joel Amey, Joff Odie and Theo Ellis and are soon heading out on a UK tour, as well as a string of US dates and festival appearances (definitely recommend going to see them!) dates and tickets can be found here.

FourFiveSeconds is starting to become one of those songs that is covered and played a lot, but there's a few covers of this song that really stand out. James Bay's being one of them. The British singer/songwriter headed into the Live Lounge the other day and recorded this cover, it's brilliant and manages to stick to the original as well as having a unique James Bay stylesque twist on it.

Young Romance are a London based noise pop duo, Claire (vocals and drums) and Paolo (guitar) formed in 2013. 2014 saw the band self release their critically acclaimed debut 7" 'Pale' and being a part of Dot to Dot Festival, as well as a run of UK shows supporting The Heartbreaks. 'Wasting Time' is the first offering from their four track EP 'Wild' which is out now and available here.