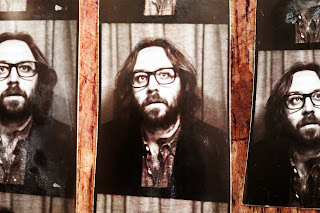 After finding success as lead guitarist and keyboard player in the recently disbanded Noah and the Whale, Fred Abbott is now previewing his debut solo album ‘Serious Poke’, with a free download of ‘Funny How Good It Feels’. An incredibly talented multi-instrumentalist and songwriter, Fred joined Noah and the Whale(NOATW)  in 2009 and went on to huge success with the group; especially notable being his contribution to 2011’s platinum selling and highly acclaimed ‘Last Night On Earth’.
Abbott enlisted the help of  NOATW compadres and other friends for the recording of ‘Serious Poke’ with sessions taking place at West London’s British Grove Studios over the past year. The forthcoming album is set to be released on 20th July (2015).

1. How old were you when you started getting involved in music and how?
I started taking piano lessons when I was 8, but it wasn’t ‘til I was 11 and I heard Jerry Lee Lewis for the first time that I discovered rock’n’roll and fell in love with it. I started listening to Jerry, Chuck Berry, Little Richard and that was the first stuff I tried to emulate and play with my friends in bands at school – the very essence of rock’n’roll.

2. What is the most inspiring gig/concert/festival you’ve been to?
Probably Tom Waits at the Hammersmith Apollo in 2004. But going way back I remember seeing the Black Crowes for the first time at Bristol Colston Hall when I was about 13, that made me want to play guitar in a rock band. Marc Ford’s lead playing on a Goldtop Les Paul particularly blew my mind.

3. Who have you been listening to lately?
Ryan Adams, Hason Isbell, Blake Mills, Butch Walker, and a lot of ‘Missing You’ by John Waite.

1. Who and what influences you creatively with your music and lyrics?
When I listen to my songs I can hear some very obvious influences coming straight through – Tom Petty and the Heartbreakers, Springsteen, ACDC, Billy Joel, John Mayer, The Replacements, The Drive-By Truckers all spring to mind and plenty more. I haven’t tried to reinvent the wheel with my solo album or hide from the classic rock bands that have influenced me, I’ve just tried to make a good rock album.

2. If you could open a music venue, where would it be, what would you call it and why?
Myself and Urby Whale (bass player in NATW) have often hypothesised about opening a venue called “Doofus and Doofus”. It would be in the heart of Mayfair or St. James and appear quite respectable from the outside, perhaps masquerading as an upmarket tailor, but down in the basement there would be a loud, smokey blues bar with filthy live blues played every night. It could happen.

3. What process did you go through writing ‘Funny How Good It Feels’ and did it differ to other tracks on the album?
I’ve had the riff for that song for several few years and I remember writing the lyrics backstage when we were on an area tour supporting Vampire Weekend in 2013, and jamming the music with the rest of the band during soundchecks. A lot of the songs on the album were like that; I’d had the music in my head or even recorded as a demo for quite a few years but with no words. When NATW went on hiatus I really sat down and worked hard on trying to come up with some decent lyrics for all the song ideas I had.

If there was a film about you, who would you want to play you?
Russell Crowe. (Voice dubbed by Pierce Brosnan).

'Funny How Good It Feels' Review:

If this first song from Fred's album is one to go by - which is the point of previewing - I'm excited. You can hear his influences from rock, creating a fun and memorable track. Getting the listener singing along or at least tapping their foot along, appreciating his musicality, with gritty guitar (and an incredible solo section), a solid drum beat and on point vocals and lyrics. It's in my head and a constant reminder to make sure I get his debut album on 20th July!

This is one of the latest tracks from Australian rapper Iggy Azalea and features American artist Jennifer Hudson. Taken from Iggy's reissue of her debut studio album, Reclassified, it was released on 24th February and gained commercial success reaching the top ten in Australia and the UK. I really didn't like this song to start with, but it's one of those tracks that if you hear enough the upbeat and soulful vibe slowly grows on you; then you'll be singing it 24/7.

Samm Henshaw is a 21 year old singer/songwriter from London, he is incredibly talented and has a busy schedule this summer. He will be performing live at Bushstock in London, opening for James Bay in June and performing at this years sold out Barn on the Farm. He's definitely an artist to be getting excited about and if you get the chance he's a definite to see live!

Cover: Am I Wrong - Lower Than Atlantis

'Am I Wrong' originally by Norwegian musical duo, Nico & Vinz; the track was released internationally on 21st January 2014. It was a huge success worldwide, reaching #1 in Canada, New Zealand and the UK and top ten in Australia and the US, among others. Here is alternative rock band, Lower Than Atlantis, also known for their roots within the punk rock scene, enjoy!

Am I Wrong - Lower Than Atlantis (link)

This classic was originally written by American singer/songwriter Ben E. King for The Drifters, but they passed on recording it and so he recorded and released it himself. There have been over 400 recorded versions of the song - one of the most known being John Lennon's - and it featured on the soundtrack of the 1986 film, Stand By Me. In 2015, Ben E. King's version was inducted into the National Recording Registry by the Library of Congress for being 'culturally, historically or aesthetically significant', just under five weeks before he passed away.