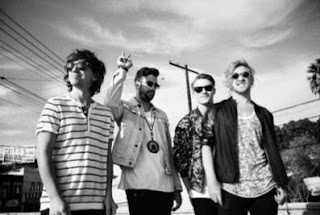 The Griswolds are a four piece Australian indie pop band, consisting of Christopher Whitehall (vocals/guitar), Daniel Duque-Perez (guitar/synth), Tim John (bass) and Lachlan West (drums). Their debut album did really well in the US, charted in the iTunes Alternative Chart in the Top 5 and with six million streams worldwide so far. They've played shows with San Cisco, Last Dinosaurs and toured Australia to ever-increasing crowds. Having just played Dot to Dot Festival and Club NME and now they're releasing 'Be Impressive' their debut album today, so I caught up with Chris for a Q&A.

1. How old were you when you started getting involved in music and how?
I was five when my parents bought me a drum kit but I didn't start playing guitar and singing until I was 11. That's when I really fell in love with it.

2. What is the most inspiring gig/concert/festival you've been to?
Kanye West in New York City!! After he released Yeezus.

3. Who have you been listening to lately?
Wild Party, Walk The Moon, Urban Cone, Kendrick Lamar

3 Questions for The Griswolds:

1. Where would you most like to perform and why?
Wembley Stadium, it'll never happen but so many of my favourite bands have played that stage like Inxs, Queen and Metallica.

2. What is your favourite track from your album 'Be Impressive' and why?
Probably '16 Years', I love the lyrical content and relate to that song a lot, it was the hardest song to write/compete as well so it's rewarding to hear it done and I'm really proud of it.

3. When creating your album was it a collective effort or did you have specific roles within the process?
Most of the writing is done by myself and Dan, we mix it up a lot when writing, no specific roles we just get together and write until we can write no more.

A quote/lyric to live by?
Don't go chasing waterfalls.

'Be Impressive' Album Review:
The album opens with the fast, catchy and upbeat song '16 Years' which was rightfully featured on Fifa 15 Soundtrack. Next is 'Right On Track', which I can imagine being really good live, it reminds me of Fun. but with no-auto tune and much better vocals. 'Beware The Dog' is one of my favourites from the album, a brilliant summer tune, with great guitar riffs, slightly reminiscent of Vampire Weekend. Their latest single 'If You Wanna Stay' is a definite for a festival set, creating a hyped atmosphere, the synths and bass work together in this one to underline the overall sound from the band. 'Down and Out' follows on well, with slower sections and a brilliant chorus, also loved the vocals/synths alongside the guitars. Starting with an innocent and meaningful tone, 'Be Impressive' carries a good message and a flipping good tune, which holds throughout the track. 'Live This Nightmare' seems to have a darker tone and grows into yet another great song. 'America' is yet another fantastically catchy summery track, with the vocals, synths, bass, guitar and drums all layered incredibly well. 'Thread The Needle' opens with strings, it's slower and highlights a more emotive tone, showing the versatility of the band, another favourite of mine. The penultimate track is 'Aurora Borealis' another catchy and overall brilliant track, especially love the instrumental sections in this song. Finishing on 'Not Ready Anymore', with an acoustic start and building layers to grow into a fantastic track, it finishes the album off on a high (and a loud singalong).
Overall, it's a brilliant album, full of great guitars, brilliant beats and bass, superb synth and subtly stand-out vocals, the only negative might be that some of the tracks may seem similar to some people, but surely that just shows they've found their sound and they're building upon that incredibly well, I'm excited for their future!

If You Wanna Stay - The Griswolds (link)