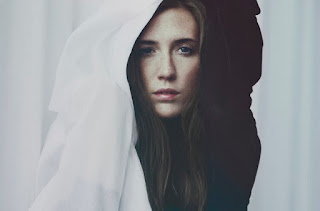 Cajsa Siik is a Swedish artist, born in a fishing village outside the town of Umeå, she ventured on her musical path, which led her to Stockholm, her new hometown. Her music has been included in various American shows, Criminal Minds, Awkward and Ravenswood to name a few. She released latest album 'Contra' in October last year and started off 2015 with a double A side single release 'State Of Low/Change Of Heart'. With support for the album from Noisey, NME and BBC 6Music; Cajsa Siik is now looking to cement herself as one of the standout voices for the year ahead. I caught up with her earlier in the year ahead of the single release 'State Of Low', now 'Change Of Heart' is out too, and they're both brilliant songs!

1. How old were you when you started getting involved in music and how?
I was five when I started playing the cello. So I got involved in music quite early. It was just a natural part of my life and I found my way to express. It also created a will and a need to express. I didn't really like to perform and I remember that music felt very private... like I had a special 'thing'... or a world that was just my own.

2. What is the most inspiring gig/concert/festival you've been to??
Hard to pick one. I remember going to this festival in my hometown Umeå, Umeå Open... I'd just started to write music and I was wide open... There were so many people out and I couldn't find my friends anywhere... I ended up at this concert by Swedish artist José González. I was just blown away.  It was so intimate and powerful. I remember thinking that I wanted to keep on writing songs and start to perform and maybe one day play this festival myself. And this year I did. Somehow a milestone...

3. Who have you been listening to lately?
I just got back from a tour in Italy. I bought three albums: Bjork - Vulnicura, James Blake - James Blake and John Lennon - Imagine.

1. Why/how did you decide to create music within the genre you do?
I haven't really looked upon it as an active choice. I guess it could have a lot to do with the music you're exposed to growing up. I've always been drawn to strong melodies and certain voices. Those voices that have a soul. The combination of lyrics and melodies that just hits your in the face. Those songs that were provocative and create the feeling of understanding and belonging... When I started writing songs I'd played classical cello for many years... but it was when I discovered the guitar and my own way to combine melodies with words that really felt I was on to something...

2. Who would you most like to write/collaborate with and why?
To me, writing songs is quite a lonely process. But I would like to try with others one day... When I meet the right person. Lately, I've been contacted by songwriters and producers that want us to collab and even if I'm a bit slow with making decisions I'm open minded. I think a collab session with Justin Vernon and Beyonce would be interesting... I would invite them to the island Norrbyskär in the north of Sweden. Where I’m at right now. Bowie can come too! Perhaps we could go fishing, drink loads of wine and talk about something important… take it from there.

3. What process did you go through creating ‘State Of Low’ and is it any different from previous tracks?
Every track is different and has their own agenda. ‘State Of Low’ was written during the same period as my second album ‘Contra’ but when recording it I felt that it wasn’t a part of the album. But it’s still a part of that period of time. ‘State Of Low’ was actually one of those songs that needed a bit of extra time… Like a person that it takes a while to get to know. You find new layers as time goes on. Recording it we tried out different ways to play it and experimented a lot. I wanted it to feel both hopeful and hopeless… I wanted to lean on a steady beat and let the vocals be effortless and honest. I wanted it to be strong and fragile, suggestive and real.

Major or minor chords?
Water or food? The sun or the moon?
I have to go with suspended chords...

'State Of Low/Change Of Heart' Review:
'State Of Low' starts slower and grows into a great song. I love the use of strings and percussion in the track, but to me the lyrics really stand out in this song, they're honest and highlight the underlying intensity and openness of the single. 'Change Of Heart' contrasts 'State Of Low' with a stronger bass line and a skippy electro riff over the top throughout. The song builds as do the layers of harmonies, again the lyrics are honest. I think this is my favourite release from Cajsa Siik yet! Both these songs show that Cajsa Siik isn't afraid to challenge herself and it also shows she deserves to be put up there with the female artists making it big in the charts at the minute. If 2015 isn't the year for Cajsa Siik, 2016 will be.