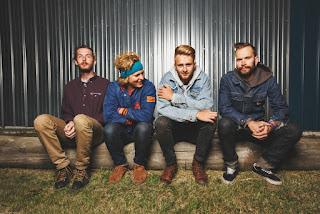 Close Talker are a young four-piece band, having formed in Saskatoon early 2012, they've gone on to pave their own path from North America to the UK and Europe. Will Quiring (vocals, guitar), Matthew Kopperud (guitar, vocals), Jeremy Olson (vocals, bass) and Chris Morien (vocals, drums) have established their moody rock sound and have recently finished their first UK tour ending with sets at The Great Escape and Liverpool Sound City Festival. Now they've just released the latest single 'Burnstick' from their debut LP 'Flux', so I caught up with Will to talk (nearly) all things music.

1. How old were you when you started getting involved in music and how?
I grew up in a very musical family. My Mom used to sing in the choir at church and taught me piano at a young age. My Dad played drums and once I started playing guitar, him and I would jam in our basement to old classic rock songs (mostly B.T.O.) So since I can remember, I've always been involved in music in some way and even with the guys in the band, we've been playing music together, in some form, since the day we met. Chris and I would jam during lunch hour in high school and later on, started a band. Our highlight was definitely playing the school talent show haha. Matt and I originally became friends because we both played the guitar and have busked together when we were younger. So ya, music has always been a big part of my life whether that was with family or my friends.

2. What is the most inspiring gig/concert/festival you've been to?
That is a great question. I don't know if I can narrow it down to one, single most inspiring concert ever, but I will say that one that would be up there would be when I first saw Royal Canoe live in Edmonton, Canada. We opened up the show and though I had heard some of their music before, I didn't really know much about the band. The show was absolutely amazing. The sounds they were creating were sounds I had never heard live before. And they were so tight and had such good stage presence - it made me want to be a better musician. We recently had the privilege of touring across Western Canada with them this past fall, and even after watching them play over 10 times, they still blow me away every time.

3. Who have you been listening to lately?
Multi Love, the new Unknown Mortal Orchestra album, is really really cool. Definitely given that a few spins. It seems like Tame Impala is releasing a new song like every day. So that as well. I also like the new Braids album which I've been listening to a bunch. Some friends from Calgary, Canada called 36? just put out a new EP and it's awesome too. Motorbike James is another Canadian artist I recently got introduced to who I really like. Always good music to be found.

1. If you had the opportunity to write a song for a soundtrack, what would be your dream TV show/film to create it for and why?
My favourite shows of all time are Breaking Bad and The Mentalist, but I'm not sure if our music would totally translate to those shows haha. Our band is really into watching movies together when we have nights off and lately we've been into older comedies like the Big Lebowski and Best In Show. So, if they ever did a remake of one of those movies and wanted one of our songs, we would definitely be on board. Over the last few tours, we've slowly been watching all of the Harry Potter movies in order (I think we are on number five). So if they ever decide to bring Harry back from the dead and make another movie, that could be another option.

2. Having toured recently, where would you most like to go back to and why?
I would love to go back to Brussels, Belgium. We were there on our most recent European tour and although we only played a house show, it was one of the most enjoyable shows of the tour. The crowd was so engaged and welcoming and really seemed to enjoy our music. We received great hospitality as well and the food in Brussels is insane. I would love to go back there a play a few shows there, and re-unite with some friends we made on our last visit.

3. What process did you go through writing 'Burnstick' and did it differ from other tracks on your LP 'Flux'?
'Burnstick' is probably one of the most meaningful songs for us as a band because it's about a night that we all had together on one of our very first tours across Western Canada. The night consisted of us walking together across Burnstick Lake, which was frozen due to the extremely cold Canadian winters. We wrote the song as a group, the four of us, which is pretty similar to the entire writing process for the songs on Flux. With our first album 'Timbers', there was a lot less of that 'communal' writing stance and we found that when the four of us got in the space together to write, the songs that would come from that would be our favourite and most meaningful songs. We decided to do this when writing the last record and I think this style of writing is something we will continue to do as long as we can.

Favourite place to go out for a beer and why?
During the summer, the Yard and Flagon in Saskatoon has a deadly patio which is great when the weather is nice. But I would have to say that The Capitol is probably my favourite place. On Wednesdays, they have a burger and beer deal and whenever I go, I always see some familiar faces and good friends.

'Burnstick' Single Review:
Bombay Bicycle Club meets Death Cab For Cutie, a generally brilliant track. A great rhythm and guitar riff underlined with a solid bass line and stellar vocals. The middle section of the song allows the listener to focus on the instrumental but layers back up into the catchy chorus; which I'm sure would be a fantastic live. It's a well crafted song, both lyrically and musically, and I feel the music video also accompanies that well. 'Burnstick' summarises Close Talker's sound perfectly and if you like this, you'll love the album - if you don't like this track, the album still offers 10 tracks with unique aspects to them, I really do urge you to give this one a listen, it's a favourite of mine at the minute and it's been going round in my head for weeks.