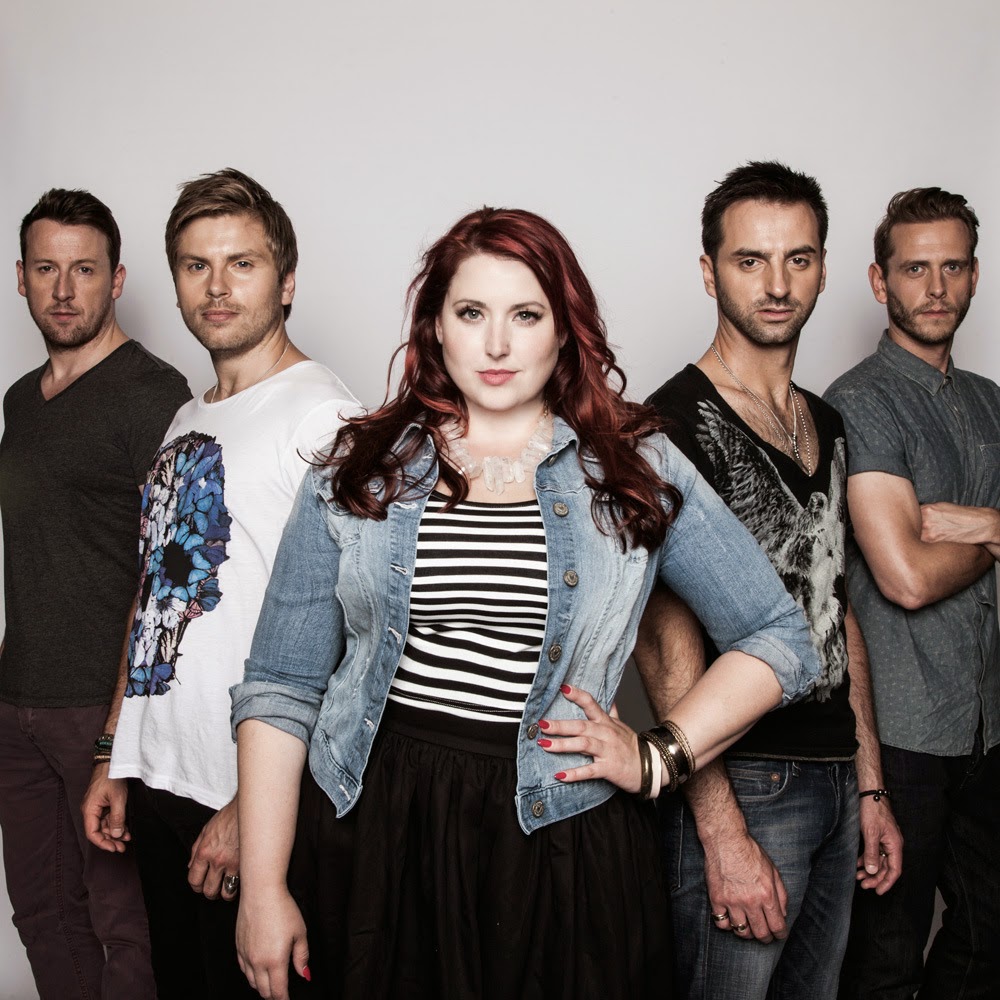 Having met when Jess was a soloist supporting The Overtones on tour, the group came together after the four boys formed her backing band for the Boyzone BZ 20 Tour. Blowing away audiences at the C2C Festival and selling out their two headlining dates in build up to the appearance. Jess, Dave, Ricci, Steve and Louis are now on countdown to summer and the festival season. With a successful first album, they've just announced a UK Tour, it is exciting times in the Jess and the Bandits camp.

1. How old were you when you started getting involved in music and how?
I started singing pretty much before I could talk. From the time I was old enough to audition for musicals and church events (about eight years old), I was doing that.

2. What is the most inspiring gig/concert/festival you've been to?
Every single concert I go to inspires me. I sit/stand there like a student studying everything about the performance. Seeing such amazing artists inspires me to be better. I actually used to find it to be somewhat emotional because that is what I dreamed of doing.

3. Who have you been listening to lately?
Lately, I've been to listening to a band called Old Dominion and an artist named Sam Hunt. Both up and coming in the country music world!

3 Questions for Jess & The Bandits:

1. You've played in many places, but where would you most like to perform and why?
I think we'd love to perform as a band at Glastonbury. A few of the Bandits have had a taste of that in the past playing with other artists but it would incredible to do it as Jess and the Bandits.
Also performing at the Country Music Awards or the American Country Music Awards would be a dream come true!

2. In recent years, country music has been becoming more prominent in 'mainstream' music, why do you think this is and how do you think it could be grown even more?
We think the fact that country music as a genre is becoming more mainstream around the world helps with that. We always joke that we are easing new fans into country music before we go really country on them! As country artists from the U.S. behind to spend more time touring overseas it will bring more awareness to the genre and help it grow, simply because of their high profiles. It will also be great when radio stations like Chris Country (UK) go national and easier for new fans to listen to country music.

3. What song from 'Here We Go Again' did you most enjoy creating and why?
That's a very difficult question because every song has a life of its own and a story behind it. If we could only choose one it would have to be 'Ready Set'. It's one of those songs that was just fun to write, it came together in about 30 minutes and those are usually the most fun.

Do you have any superstitions or small things you do before a live set?
Jess always finds a little corner and prays. The Bandits get excited and pumped up to get their energy up. We all get together before going on stage and give hugs and wish each other luck. I'm sure as time goes on we'l develop little superstitions.

'Here We Go Again' Album Review:
The album opens with a rockier country track, 'Ready Set', it's really catchy and perfect for a road trip in the summer with a brilliant beat and great guitars. 'Love Like That' and 'You Can't Stop Me' follow on well but are steadier tracks, 'Love Like That' has honest and emotive lyrics and 'You Can't Stop Me' allows you to focus on Jess' wonderful vocals. Next is 'Wasted Man', a country song with many pop infused aspects, again it's catchy and will get stuck in your head; definitely not a bad thing! 'Nitty Gritty' is an upbeat song with lyrics that add to the well covered social commentary on popular topic within the music industry of self-belief, confidence and appearance and I feel it's done in a better way than many other 'pop songs' that make it into the charts. There is a bit of a lull in the album with 'If You Can't Be Mine' and 'What If', two slower and honest tracks that grow into steady songs. 'My Name Is Trouble' wakes you back up with an upbeat tone, the claps, guitars and bass continue to layer up into a song that I can imagine being great live. 'Drunk On Me' is a subtly powerful song with the guitars and vocals working brilliantly together and 'Getting Into Something' is another upbeat 'pop' track within the album. The title track from the album 'Here We Go Again' really sums up their sound perfectly, starts slower and emotive and then builds into a strong chorus. 'Single Tonight' is the penultimate song and the thing that came straight to mind when I listened to it, was road tripping across America, the song coming on the radio and everyone singing along. The album finishes with 'Wichita Lineman', my favourite song from the album, the focus on piano accompanying the vocals is simply beautiful. It's a powerful end to the album and closes it well.
Overall the album is great, if you're a fan of country and love inspired songs, this is your go-to and if you like good upbeat, catchy songs or slower emotive tracks, there's a few in the mix for you too.

You Can't Stop Me (live) - Jess and the Bandits (link)

Chart: Runaway (U & I) - Galantis
'Runaway (U & I)' is the lead single from Swedish electronic duo Galantis' debut studio album 'Pharamacy'. It was released on 5th October 2014 but has only recently achieved chart success in many countries; Australia, Belgium, Netherlands, New Zealand and has peaked at #4 in the UK Singles Chart. It's a catchy house track, perfect for the summery weather.

Live Performance: Say You Do - Dierks Bentley
Here is a live performance from a few months ago by American country singer/songwriter Dierks Bentley. 'Say You Do' was released in October 2014 as the fourth single from his seventh studio album 'Riser'. This year 'Riser' was nominated for Best Country Album at the 57th Grammy Awards and reached #6 in the US Billboard 200.

Say You Do - Dierks Bentley (link)

Cover: Take Me To Church (Mashup) - Lucy Spraggan
Here is a rather wonderful mash-up from previously featured (and massively talented) Lucy Spraggan. She mashes Hozier's chart hit 'Take Me To Church' with others including Katy Perry's 'Firework', Beyonce's 'XO' and Ed Sheeran's 'Sing' amongst others, how does that work? I wasn't sure either but it really does and it shows once again that Lucy can twist any song into any genre and make it her own. Enjoy!

YouTube: On A Clear Day - Anthony Strong
Now to some jazz to chill out to, this is pianist and jazz singer, Anthony Strong's arrangement of 'On A Clear Day'. This is the title track from his forthcoming album (due to be released on 20th July), it's inspired by The Peddler's version and Anthony has 'big bandified' it. He sold out Ronnie Scott's on 24th May but he returns to London after a couple of shows in the US. You can find more info and a full list of dates here.