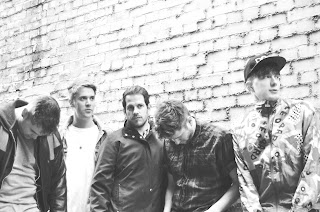 After gathering huge acclaim for their breakthrough single 'U Got The Power' back in 2013; Manchester based electro-pop band Swiss Lips deliver their debut album. Having shared the stage with other artists/bands such as Ladyhawke, Bastille and Blur. Now opening 2015 with their latest single 'Books' and self-titled debut album makes the band one to watch and this could be their year to shine.

1. How old were you when you started getting involved in music and how?
I picked up my Dad's guitar when I was around 15 and got pretty obsessed with it. For a long time I just wanted to be a guitarist but then realised I wasn't really good enough so started ti focus on singing and writing songs when I was about 12.

2. What is the most inspiring gig/concert/festival you've been to?
Tough question. Probably Beck at Brixton Academy when I was a little kid, his show was so full of energy and unpredictable. I was mesmerised. Me and my mate Maj waited for him outside like fangirls. He sat on the kerb and talked to us about music for about 15 minutes and took my shitty demo CD off me. I'm still waiting for him to call me with his thoughts.

1. You've shared a stage with many artists and bands, but who would your dream collaboration be with and why?
I'd like to make something with Kanye West and his crew. On a production level Yeezus totally blew my mind. I love how nasty and progressive it is. His music is a big inspiration.

2. What is your favourite track to perform live and why?
'Forever'. It's a brief moment of calm in our set and I have to put a lot into the vocal to get it right, it's satisfying I guess.

3. What process did you go through creating 'Books' musically and visually?
The song was built around a demo idea from Luke then added to with ideas from Tim and mainly lyrics/production from me. It took a long time to get right. It was the only majorly collaborative effort on the album and so is us at our best and purest I think. Visually we had a really strong idea for the video but that mainly came from the attitude and 'call to arms' nature of the lyrics.

Favourite place to be in the world and why?
Tokyo, because it's like stepping into a dream.

'Swiss Lips' Album Review:
The opening track 'Books' is by far my favourite song from the album, the production is great, mixing 80s electro sound with recent 'indie' aspects. It definitely paves the way for the rest of the album. Their breakthrough single from 2013 'U Got The Power' follows on well, another upbeat and memorable track. 'Honey' and 'Diamonds' are fit the typical electro sound mould, with brilliant synths and percussions, seeming simplistic but almost futuristic. Next is another favourite of mine, 'Over and Over', musically it's got a bit of everything you'd want in a solid electro pop song and how this hasn't had more support I'm not sure. It's a 'tune'.
'In The Water' is reminiscent of CHVRCHES and holds a brilliant bass line and the overlying bells and synths are great. Musically, I really love this track, however lyrically, I feel it could have been stronger. Another highlight of the album for me is 'Forever', a chilled track with a steady beat that you can just sit and really listen to and escape into. 'Carolyn' is another upbeat track, with solid vocals, a gritty bass and bouncy synths. 'Kid' starts cinematic and grows into a fantastic electronic track full of layers and the album closes with 'Running Away', allowing to focus on the lyrics, ending on a more poignant note and definitely seems reminiscent of 80s electronic with incredible guitar sections.
It's a brilliant album and one of my top albums from this year so far, nearly every song could stand alone as a single and I'm already excited about their next album. You can listen to the whole album here: https://soundcloud.com/swiss-lips/sets/album