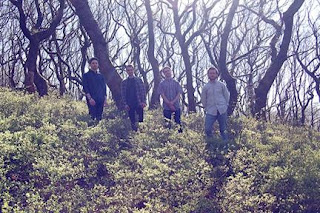 Forrest are an alternative four-piece from South Wales, formed in 2010 and comprised of Dan, Jordan, Mark and Ryan. Their debut EP titled 'Before You Go' and a split release with Ireland's 'The Winter Passing', were largely met with positive coverage across the internet, building a small but dedicated following from the bands Bandcamp page. They've spent a year writing and recording their forthcoming debut album 'Soluna' and now it's close to being released into the world, so I caught up with Matt to ask him a few questions...

1. How old were you when you started getting involved and how?
I was about 12 when I got my first guitar and fell in love with music ever since. Me and Jordan grew up in school together and we were always involved in musical endeavours. In my first year of college I was introduced to Ryan through a mutual friend. We talked about starting a band so we got together, jammed out some old Blink 182 songs and started Forrest. It's been an incredible journey so far, I've met some of the best people along the way and I can't wait to get back on the road.

2. What is the most inspiring gig/concert/festival you've ever been to?
That's difficult. I've been to a lot of shows that all have great stories. A highlight of mine was definitely seeing Blink 182 just after their reunion, 12 year old me was going nuts.

3. Who have you been listening to lately?
I've been really into the new Turnover record lately which just came out on Run For Cover Records, I listen to it pretty much every morning before going to work. Also, I'm really impressed with Four Year Strong's self titled, who doesn't like riffs?

1. If you could invite three people to one of your gigs, who would you choose and why?
I would definitely invite Bear Grylls, just incase. Jack from Lost, he seems like a good dude. I would invite John Snow too, I'm not a big fan of Winter.

2. What is your favourite tracks from your forthcoming album 'Soluna' and why does it stand out for you?
'Standing Stone' is my personal favourite. I think it's a song that really captures Forrest's sound. As a band, I think we've really matured musically. We're always trying new things and this track displays that perfectly in my opinion.

3. When writing the album, was it a collective effort or did you have specific roles within the group?
Usually when we write new songs, each of us have different ideas that we just put together. When writing the album we wrote songs as a band which we've never done before. It was a lengthy process but the end result was very rewarding. We can't wait for everyone to hear it!

'Soluna' Album Review:
The debut album from Forrest, has definitely allowed them to pave their own way and create a distinct sound. From the first track 'Ambition' through to the last, 'Meet Me There' there wasn't one song I didn't enjoy. The only negative someone could pick up is that their songs may seem similar musically, however they all hold the skill of beautifully written lyrics and if you involve yourself enough in the music, you can hear the intricate differences. 'Close To Me' reminds me of Catfish and the Bottlemen, with an alternative rock approach, whilst they contrast that song with 'Sol'; two minutes of beautiful instrumental, seeming almost emotive. It's a great album and one I'm sure a lot of people will enjoy!


Close To Me - Forrest (Bandcamp link)