Barn on the Farm is an independent and intimate folk-orientated music festival, held in several barns on Over Farm, Gloucestershire. Created in 2010 as a small venture, driven by a passion for decent, new music; now in it's sixth year, it's gained a reputation as a place you will see the next big thing whilst meeting people with the same passion for music. With names like Ed Sheeran, Ben Howard, Nina Nesbitt and Bastille taking to the stage in previous years, there's only one place this fantastic festival is heading and that's to even bigger audiences and awards. Joshua Sanger and the rest of his Barn on the Farm family are brilliant, friendly and should be thanked and congratulated on creating such a welcoming festival, full of brilliant live music and moments. 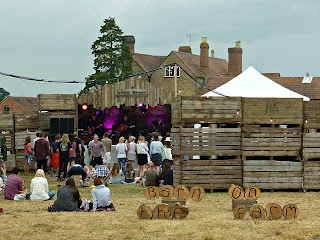 Unfortunately, I missed out on intimate Friday tickets, but have heard how great and special the evening was with Gabrielle Aplin as the secret headliner and guests joining her up on stage.
Saturday, was a good day, weather and music wise, I caught the start of Samm Henshaw's set, he's got a chilled, reggae and soul kinda vibe and being back by his wonderful band just makes his live set up brilliant.

I had a look around the festival set up for a bit, taking in the music and checking out the food, drink and merch available, enough to choose from without it being too focused on anything but the music. Hannah Grace did a stunning set on the Wooden Barn Stage and got Gabrielle Aplin and Harry Hudson-Taylor on stage for an acoustic rendition of 'Hopeful' - a beautiful song, as well as 'Meant To Be Kind', the title track from her debut EP.

I headed to see Jake Isaac on Main Stage, as he's been a featured artist over on our blog, we wanted to finally get to see him perform live, he was running late so instead we were treated to an earlier than scheduled set from Mike Dignam, which wasn't a bad thing! He played some new songs, 'Dark Mind' was a highlight of his set for me and the rest of the songs are sounding great and I'm sure I'm not the only one excited for his forthcoming album now.

Days With You - Mike Dignam (link)

I grabbed some food and then headed back to watch Jake Isaac on Main Stage, his set was great, full of energy and worth the wait. 'Fool For You' and the slower and more emotive 'I'm A Man' were highlights from his set, his beautiful vocals couple up with his acoustic guitar so well.

One of the bands I was most looking forward to this weekend (and ended up being a highlight for me) were Meadowlark. After overcoming technical problems, they played songs from their debut EP 'Three Six Five' as well as their latest 'Dual', and Kate performed 'Little Boxes', just her and an electric guitar - shame about the guys to the side, who talked through most of it. Still, their set and performance was fantastic and people were joining in, dancing and enjoying themselves, which is for sure, what Barn on the Farm is all about.

Then I headed to Main Stage for a bit of Eliza and the Bear, I love their sound and again, they were brilliant live, I've only really ever listened to two of their songs, 'It Gets Cold' and 'Brother's Boat', however I enjoyed all the songs I heard during their set and I definitely went away encouraged to listen to more of their music.

Make It On My Own - Eliza and the Bear (link)

After missing JP Cooper at Boileroom earlier this year, I was pretty set on making sure I saw him at some point this year, and BOTF opened that opportunity for me. He performed on the Wooden Barn Stage and he blew my mind; his sound is beautifully intricate and soulful as well as being upbeat. 'Closer' is by far one of my favourite songs that's been released this year and to see him live was one to tick of my list. (I also got to have a real quick chat with him to say his set was great - and he was lovely - which is always an added bonus!)

Another band I'd listened to a few songs of and liked but never seen live or listened solely to (if that makes sense) is Prides. Again, I was blown away and will definitely be getting their forthcoming album, I loved their set, it was a good mix of upbeat as well as slightly more stripped back powerful stuff. New songs as well as old in the set list and I loved them all. They got everyone joining in and enjoying the atmosphere which is always a plus. 'Little Danger' and 'Higher Love' were by far highlights of mine.

Then - it felt like - everyone headed to the New Stage to watch Amber Run do what they do best, get lost in the music and drag everyone else in with them - the atmosphere whenever I've seen them has always been high and intense but there was something about the festival setting that just made it all even better. The mainly performed tracks from their album but included 'Heaven' into the set, which was brilliant and fitted in nicely. They got Harry from Hudson Taylor on stage for 'I Found' and there was a phenomenal instrumental section in the closing song 'Noah', they drew a big crowd, which made me think if they're booked next year - they'll hopefully make it to the main stage!

Caught the end of Foy Vance's set and the crowd that had gathered outside the barn doors were loving it! Then the night finished with the beautiful harmonies of The Staves on Main Stage. Unfortunately after a lack of sleep Friday night and an early start Saturday, I was too worn out to stay around for the whole of their set, but I chilled at the back for the first three songs and headed to my tent, falling asleep to their music in the distance. Wouldn't mind seeing them live again, I liked what I heard and I do like their album, but struggle with the lullaby effect, similar to Birdy and Bon Iver.

Make It Holy - The Staves (link)

Part 2 of this review will be going up in the scheduled upload spot on Friday, so head back to have a read and listen to our highlights from the final day of Barn on the Farm :)