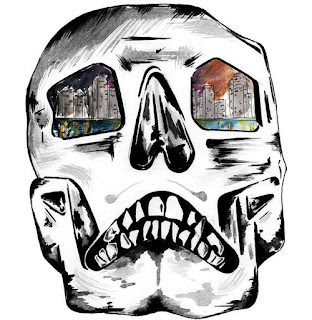 Zones is a recording project put together by Alfie Begley. Created after a string of short-lived bands during college, 'Zones' is something sustainable that can revert to a band format when he (hopefully) attends uni this September... Starting in March this year, when self-releasing a six-track EP and a single, all self-recorded and arranged. It's a platform used to showcase his original music. Each release is usually preceded by artwork that adds another aspect to each of them. There are also features from very talented musicians on different tracks, which adds yet another twist to the unique project Alfie has created. (This isn't the last you'll see of Alfie or the Zones Project; on Music In Time Blog or in the world of music...)

'Dawn Till Dusk' Review:
Well... The intro is phenomenal, if that doesn't pull you in to listen to the rest of the song, I'm not sure what will. Brilliantly gritty and intense. The vocals really add to the track, giving a slightly softer melodical tone over the hard guitar and percussion. When Alfie sent me the link, I listened to it three times before replying, purely because I was enjoying the song that much... There's a slightly slower, more haunting mini section in the track that builds into a wonderful guitar led instrumental section. It's five minutes of pure brilliance. Already looking forward to his next release!

1. Bury It There - Kimberly Anne
Previously spotlighted and a favourite of ours, Kimberly Anne, has just released her first single from her debut album... Not only is it a brilliant song, it's also got a shiny new (and just as fab) music video to go alongside it! You can download the single (with a B side) HERE and find dates to see her live (because she's incredible live too) HERE.

Bury It There - Kimberly Anne (link)

2. Holy Soul - Salt Cathedral
I came across this track whilst exploring Soundcloud the other day, and thought it was too good to not share. Salt Cathedral are Juliana Ronderos and Nicolas Losado from New York via Colombia. They create dreamy electronic music, naturally after listening to this song I searched into their music a little more and fell in love with their most recent EP 'Oom Velt', really excited to hear some more from them! (You can download the EP here).

One For The Road - Dodie Clark (link)