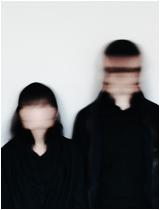 Christian and Linda are the hard working duo behind the Swedish electro act, Death In The Afternoon. Their latest single "'82", was produced remotely by themselves and shows their talent and artistic individuality. This has paid off as they've already gained the support of GQ Magazine, JaJaJa Music and Nordic By Nature, to name a few.

1. How old were you when you started getting involved in music and how?
Christian: When I got my first guitar at my 11th birthday. It was a crappy, barely playable thing, but I've stuck with it since. First band was with some friends from school, around the age of 14-15.
Linda: I grew up in a musical family and tried different instruments but it never really interested me. However, when I was 16, my older brother David needed a bass player for his band and pretty much forced me to start playing and I've been playing ever since.

2. What is the most inspiring musical performance you've ever seen?
We remember being really blown away by The Cure many years ago. Old favourites that really delivered.

3 Qs for Death In The Afternoon:

1. How did the name 'Death In The Afternoon' come about?
We spend a lot of time at the library. Our favourite spot is by a big window, overlook the water. It's right by the English/American literature section. Read a lot of books there, Hemingway included, and Death in the afternoon really stuck. We also like that our name seems to build up a certain expectation on our band. People expect a metal band and they get a cheesy synth/pop duo.

2. For people that have not heard your music, describe your sound in five words...
Eighties-esque falsetto synth funk.

3. What process did you go through creating "'82" and did it differ to your previous releases?
On our last album (Kino) we focused on quite a lot of synths, and "filled in the gaps" with guitars. With '82 we pretty much did the opposite, which we also did with our other single (Let's Talk). A back to basics kind of approach really.

If you could be a fictional character, who would you choose to be and why?
Has to be Batman. He has the coolest clothes.

'82 Review:
Death In The Afternoon's track '82 could easily be found in a film soundtrack, the overall soundscape they create keeps the listener glued to the speakers throughout the track. There is a definite 80s-esque flavour to it and I really love the synths, guitars and back line beat contrasting yet complimenting each other so wonderfully. This is the perfect dreamy summer into autumn kind of song.


'82 - Death In The Afternoon (Soundcloud Link)