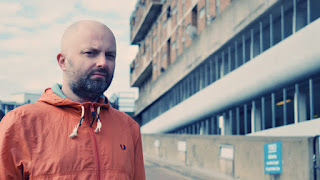 London's Rodney Cromwell, is the solo project of Adam Creswell, founding member of indie-folktronica band Saloon and one half of electronic two piece Arthur & Martha. He recently released his debut LP 'Age Of Anxiety', with multiple tracks having been premiered on BBC6 Music, Soho Radio, and Phoenix FM, as well as already gaining repeat airplay on national Radio 3 in Spain. This LP introduces the modern electronic lover to some epic retro future synth music...

1. How old were you when you started getting involved in music and how?
Unlike some I didn't come from much of a musical household. Growing up my Dad listened mostly to classical and jazz, my Mum, stuff like Warren Zevon and Elvis Costello. For years we didn't have any musical instruments in the house other than a Fisher Price Xylophone and Casio PT-80. One day I went over to my friend Sean's house and there was an acoustic guitar in the corner of the living room; to me it seemed like the most radical and rebellious thing ever, to own an actual guitar. So I started a band with Sean, we were called Cosmic Onion and we played mostly Joy Divison and Pixies covers (the easy ones). I was about 17 at the time.
We plugged away for a couple of years until I moved to Reading and formed Saloon in 1998, which was my first 'proper' band. We played folk-tinted indie Krautrock with moogs. We were fairly successful considering that we didn't fit into any neat pigeonhole or play the industry game that well. And I suppose that really was the start of my love / hate relationship with the whole music scene.

2. What is the most inspiring musical performance you've ever seen?
Probabl Kraftwerk on the Tour de France tour, or Mahogany in 2000 back when they were using a reel-to-reel player for the rhythm sequencing. Or Stromae who we've seen several times over the last year. Basically, I find most inspiring anyone who can pull of an exciting live show without use of a drummer.

3. Who have you been listening to lately?
I've had 'Clearest Blue' by CHVRCHES, pretty much on repeat since they dropped it a couple of days ago.

1. What is your favourite track from your LP 'Age of Anxiety' and why does it stand out to you?
Well, as the title suggests, the album deals with my own battles with anxiety, so a lot of the themes on the records are pretty dark, about depression, panic, paranoia and so on. (I hope that doesn't put anyone off of listening to it - the music itself is actually quite cheery and danceable - it's not a Goth record or anything.)
There is one track though, the instrumental 'Baby Robot', which to me is a joyful celebration of fatherhood, so I suppose that is probably my favourite track. Although admittedly, when the kids are screaming their heads off at three in the morning, or attacking my laptop (like they are as I type) that sense of joy can be somewhat tested.

2. Who would you most like to collab / work with and why?
Well there are countless bands I would love to remix or tour with. To be honest though I'm massively happy with all the people I'm working with at the moment. I've got a couple of remixes currently in the pipeline for the awesome bands Meter Bridge and The Leaf Library, which is all very exciting.
I suppose the collaboration I would most like to happen would result in a second Arthur and Martha album. Arthur and Martha was a band that I was in with my friend Alice Hubley, who also plays and sings on several of the 'Age of Anxiety' tracks as well as playing in the Rodney Cromwell live band. We released one Arthur and Martha album called 'Navigation' way back in 2009, but we drifted onto other projects afterwards and she's now in a fab indie band called Cosines. 'Navigation' is a great album though and I think a few people would enjoy a follow-up. So if I could persuade Aice it would be ace, and hopefully if she reads this, it might convince her further!

3. What process did you go through creating 'Barry Was An Arms Dealer' and did it differ to other tracks on the LP?
For me every song I have written, whether it be for Saloon, Arthur and Martha, or Rodney Cromwell, has to have an idea at the heart of the process; it can be a really simple idea like 'this one will be in 5/4' or 'this one will be Spanish-Punk-Flamenco', but ultimately it needs that initial spark to drive it forward. So, the idea for 'Barry Was An Arms Dealer' was to write a disco song based around the motorik 'apache' beat used in so many great Krautrock records.
What I generally do is record the ideas for a few hours, mix them onto my iPhone and then over the next few days, weeks, years (!!!) listen to them on the train or around the house, and come up with extra melodies or lyrics for the next time I'm in the studio. 'Barry' was a song that came together trlatively quickly for me - i.e. it only took about six months.
I am quite a slow worker. I once did a remix for an upcoming US indie band but by the time I'd got half way through finishing their remix they'd split up. Rod Cromwell fans can probably expect the follow up to 'Age of Anxiety' in about 2035!

A movie you can watch over and over again?
'La Jetée'. Directed by Chris Marker. Unfortunately the film I have watched over and over most recently is Alvin and The Chipmunks 2... not my choice.

'Age of Anxiety' LP Review:
This release unites the best of 80s electro music with todays; and despite the topic of anxiety and depression running throughout this LP, the music itself contrasts that with a cheery, upbeat and hopeful tone throughout. 'Barry Was An Arms Dealer' taps into the sound of the 80s, but is still kept far enough away from the likes of Kraftwerk for it to still be unique and original. 'You Will Struggle' is a stand out song for me from the LP; the duet features Alice Hubley (other half of Arthur & Martha), the pair compliment each others vocals and the synths and robotic elements make this a song to get stuck in anyone's head. Baby Benedict Cresswell's gurgles feature on the instrumental track 'Baby Robot' which adds to the childlike cheeriness to this particular song, chimes of a xylophone can be heard and it just holds a meaningful innocence, listening to this one put a smile on my face. The last track on the release is one of the other songs that really stands out to me, musically it is a little more emotional in some way, and the lyrics explore the metaphor of 'Black Dog', it closes 'Age of Anxiety' summing it all up in a brilliant way.