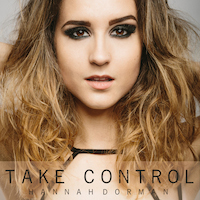 Hannah Dorman is a British singer/songwriter, based in Surrey. Having studied at ACM, gigged extensively - including a set at Chris Evans' open mic night at his pub, The Mulberry Inn - gained radio support locally, released her debut EP 'Do You Wanna Play' in 2014 and has just released her latest single 'Take Control'. Armed with her guitar and often backed by her band, Hannah is making waves with her music and is one to watch in the near future (you can also catch her at our showcase on 19th December...)

1. How old were you when you started getting involved in music and how?
Without sounding like a walking cliché, I wanted to be a 'poster' since forever. I had guitar lessons from the age of 9, and started songwriting around that age. When I was 15 I saw McFly play Wembley Arena. I was applying for The Brit School and ACM at that time and got a place at Brit but decided it wasn't for me, so I went to ACM straight after secondary school, which was a very inspiring time for me. We went on holiday over the Christmas and New Year, when January '09 came around I was like, this is it, I'm doing it. And the rest is history!

2. What is the most inspiring musical performance you've ever seen?
Either that McFly concert I just mentioned (or any McFly show, they're amazing showmen and musicians) or when we went to see Take That in 2009. Take That aren't everyone's cup of tea musically, but the show was unreal. We saw the Circus Tour, I had pharyngitis at the time so couldn't sing along, which killed me. We heard it was a show not to muss, and I'm so glad we went, I was inspired for months after!

3. Who have you been listening to lately?
I drive around a lot for my day job, so I always have the radio on and I love to keep up t date with the charts and sing along. But if I'm going to put an album on, I like a bit of Mallory Knox, Lower Than Atlantis, You Me At Six, so a bit more rocky.

1. Who influences you musically and what inspires you lyrically?
Musically I used to listen to a lot of Anastasia, Kelly Clarkson, Shania Twain and Avril Lavigne. I can definitely hear their influence in my music. Lyrically I write about current events and situations in my life, but I generally take a little idea and expand on it. Rather than writing word for word about everything that happened last week, I'll take a specific event, and work around that.

2. If you could play a headline show anywhere in the world, where would you like it to be and why?
Wembley Stadium... because, who would turn that gig down?!

3. What process did you go through creating 'Take Control', both musically and visually?
I write all my songs acoustically on my guitar, I try to capture the mood I want through the dynamics, strumming pattern etc. I then recorded it, just me and my guitar, and took it to the band. We went to my guitarist's house, goofed around, had tea and snacks and put down all of our ideas and created a demo. From that we actually went on to record the 'session' style videos I put on my YouTube channel earlier in the year. Once I decided this was going to be the single, due to the reaction of the video and the live response, we spent two days in the studio recording. When we got the mix back I was speaking to the very talented Tommy Reynolds about doing some pictures and the video, which all came together really well. I designed all the artwork myself... and I won't go into all the rest of the boring behind the scenes bits, but that's a very brief version of the past 6 months!

A TV show you wish was still on air?
That's So Raven

'Take Control' Review:
This single summarises Hannah's sound perfectly, rocky pop with slight elements of country in there every now and then. The catchy chorus drives the track forwards, and the guitars compliment Hannah's vocals really well, with the bass and drums underlining the song well. It's an upbeat track, perfect for the car, a party and would be even better live!