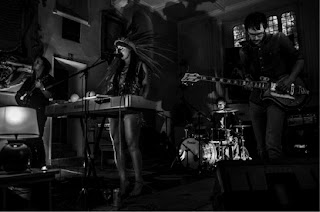 Jingo are Jack Buckett, Joe Reeves, Katie (now) Buckett and Chris Smith. Back in 2013, the band won the 'Made In Shoreditch' competition, which entitled them to record for two days at the infamous Strongroom Studios. Since then, they've gone on to support Ken Stringfellow and Troy Von Balthazar in Europe, and have played a sold out show at Old St. Pancras Church for their A.D.D. single launch, amongst many other live performances. Jingo have recently released their EP 'Ghost In The Machine', and with each release they've taken musical leaps, all of which present what the band have become; 'serious musicians brimming with promise'... We caught up with Jack for a Q&A...

1. How old were you when you started getting involved in music and how?
I was 14 and a friend at school taught me how to play the exorcist theme tune on the guitar, basically gave up sport at that point to play guitar.

2. What is the most inspiring musical performance you've ever seen?
Hard to pin that down to one performance but I remember seeing Pearl Jam in 2008 for the first time and I didn't know who they were. I just found myself completely dumbfounded at the end of every song. I've never seen so much raw passion and energy go into each and every note. They've continued to inspire me on a daily basis.

3. Who have you been listening to lately?
Loving the new Dead Weather track, otherwise it's usually a pretty healthy dose of BRNS, Lana Del Rey, Tame Impala and Interpol.

1. Whose record collection would you most like to listen to and why?
Josh Homme because he's basically the coolest motherfucker out there and whatever he listens to has to be awesome.

2. What process did you go through creating 'Ghost In The Machine' and did it differ from the other tracks on the EP?
I gave Katie a vocal harmoniser for Christmas and the melody of this tune was the first that came out of her experimentation with it. It was also a really strong collaborative effort from that point to carve out the rest of the song. I think every instrument plays an entirely crucial and important part in the track, each standing on its own two feet. I love every part, more than most of our other songs and the whole track continues to feel extra special especially when played live because of the emotion that it evokes when playing it.

3. You've recently toured the US and parts of Europe, but what three countries would you most like to tour and why?
Brazil / Mexico
Japan
Australia
All of these places seem to have a huge thirst for rock music and I think we'd work well there.

Ideal Friday night?
Playing a show in a foreign country, in a previously unvisited city with a couple of other awesome bands. Smashing the show and then going wherever the night takes us with the rest of the bands knowing that the next day you have to get up and go do it again in another new place. They tend to be the most memorable nights because you cherish every moment.

'Ghost In The Machine EP' Review:
The EP opens with 'A.D.D.', a more mellow track from the realease, the harmonies really stand out, and the track is reminiscent of something Christina Perri would release. 'Ghost In The Machine' is the lead single from the EP, a steady track, it does summarise the band's sound pretty well, and the seemingly simplistic structure of this song layered up reminds me of Imogen Heap. '45 Friends' is again harmony led, a grittier track with rocky guitar and drums, compared to the other tracks on the release and probably one of their most upbeat. 'Boys Down The Hall' holds a strange but wonderful intense darkness and builds into a heavy track. The EP finishes with 'No Ordinary Disco', which is again different from each of the other tracks on the release, it's nice to be able to listen a variety of sounds within genres, mixing them up, but I'm hoping Jingo hold onto one sound for the next release and experiment within that, preferably including the incredibly harmony use, because that's the one current that I love in this EP.

Ghost In The Machine - Jingo (link)