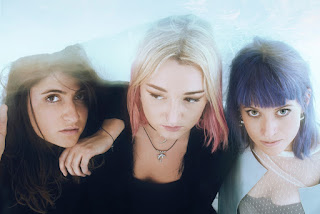 Sydney-based Little May have been hailed internationally as one of Australia's breakout acts of the year. In the UK they sold out their London show two months in advance and in the US, Little May have played alongside the likes of Mumford & Sons, Alabama Shakes and The Flaming Lips on the Gentlemen of the Road Tour. During April and May 2015, Annie Hamilton, Liz Drummond and Hannah Field, along with their band Cat Hunter and Mark Harding, made their way to upstate New York and began recording their debut album 'For The Company' - which was produced by Aaron Brooking Dessner (of The National) and is now available worldwide.

'For The Company' Album Review:
This 11 track release is a fantastic collection of songs in one place from one an equally fantastic indie folk band. The album opens with 'Cicadas' a melodic track led by layers of guitars and vocals and influences of country. 'Sold' also holds that country element to it, with added strings and building into an upbeat track, this one stands out as one of my highlights from the album. 'Home' was the band's first single with it's catchy chorus and overall ability to stand out from the rest of the album, I can imagine it being brilliant live. A more mellow tone seeps into the album at this point, 'Oh My My' has a haunting element to it, with subtle harmonies and a solid drum layer throughout. 'Bow & Arrow' includes strings again that add to the slower tone and emotive lyrics. The latest single 'Seven Hours' is simply intense (if that's possible), this track in particular highlights the band's ability to tell a narrative through their lyrics as well as create a fantastic song musically. 'Chemicals' follows on perfectly, reminding me of Lykke Li or SOAK with the atmospheric melody and steady beat and wonderful vocals. Whereas 'Sinks' is more reminiscent of The Staves, with ebbs and flows in the pace  and layers of the song. 'Remind Me' is easily one of the heavier tracks from the album, a rocky intro that'll wake you up to fantastic gritty guitar riffs. 'Where Do You Sleep?' slows the album down again with a lullaby-esque tone, leading onto 'Shine Is Brighter At Night' which closes the album and leaves you relaxed and ready to chill.