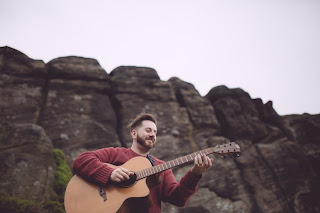 Multi-instrumentalist, songwriter and producer, Jamie Beau released his alt-folk debut album, 'Tales of the Earth, Tales of the Sea...' early last month (December '15). The album is a creation of a two year journey that saw him share stages with The Magic Numbers, Dan Reed and Amy Wadge (co-writer for Ed Sheeran); as well as being featured by BBC Introducing and appearances at several festivals. He's got a show at Kontra Roots Club (Kettering) on 22nd January (2016) and is definitely one to watch for this year...

1. How old were you when you started getting involved in music and how?
I was around seven, I started learning classical / flamenco guitar with my Dad, then I stopped for a little while and restarted in my early teens. That's where I started taking it more seriously anyway and ended up in some alt / grunge / indie bands at the time.

2. What is the most inspiring musical performance you've ever seen?
I'd have to say Thomas Leeb playing at the London Acoustic Guitar Show in 2012. It was that performance that reignited my interest in music and gave the epiphany moment that started me on my current musical journey.

3. Who have you been listening to lately?
Guy Garvey's album is really good. I've been listening to a lot of Ed Harcourts back cat of late too. Philip Henry and Hannah Martin's Mynd is a brilliant folk album. The more heavy stuff like Lower Than Atlantis, Marmosets & Royal Blood.

1. Which three countries would you like to tour most and why?
Japan - I'd love to experience the culture and see the country, I think they've got an incredible music scene that gets completely bypassed by Western music listeners.
Iceland - I simply love that country, my wife and I went there a year ago and it felt like I was home. The landscape is incredible, but the thing I dig the most are the people we met! Great sense of humour. Oh and they've got a ridiculously good music scene for such a small nation.
Brazil - My Dad was a merchant sailor and he speaks so highly of South America so I'd love to go there and tour one day. Again, there's some fantastic music coming out of Brazil at the moment.

2. What inspires your lyrics and who influences your sound?
Lyrically it's always about personal reflection - I got told once that "you should always write of what you know" and that has stuck with me.
My sound influence comes from all sorts of places. I got told that it sounds like Guy Garvey and Jeffy Buckley's DNA got mixed. Which was obviously an incredible compliment as they're huge influences on me. The John Butler trio are probably the closest thing I draw influence from, but probably a bit more British and miserable haha! Definitely Ben Howard too.

3. Which track on your album 'Tales of the Earth, Tales of the Sea...' stands out to you as your favourite and why?
My favourite track changes from listen to listen, overall though it is probably 'Prayer of the Drunk'. It's about a pep talk that a friend of mine gave me when I was going through a really very crappy time. My friend Steve turned up to my house, looked and me and without me saying a word he said "Get your coat, we're going out and until the sun is up we're drinking whiskey, until the bar is running dry we're drinking whiskey and until we both throw up we're drinking whiskey." And that was exactly what was needed, he just knew. So really, the song is as much a drinking song as it is about true friendship, and that's why I love that track.

If you could open a venue anywhere, where would it be, what would it be called and what would the opening night entail?
Blimey... It'd be called 'Whiskey n Tunes' in Reykjavik, Iceland. Surprise surprise, it'd be a whiskey and live music bar with as many nice malts as I could get my hands on, and the opening night rule is for each song the band plays everyone in the venue has to drink a whiskey, band, staff and customers included... That'd be a messy bar but awesome.

'Tales of the Earth, Tales of the Sea' Album Review:
This album is a fantastic collection of tracks, for listeners of Newton Faulkner, Ben Howard, Mumford & Sons and more...
'Pope' opens the release with stripped back percussion, growing with guitars and a brilliant contrast of grit to heartfelt vocals. 'Prayer Of The Drunk' is very much a drinking song, upbeat and easy to pick up and sing-a-long to... The alternative rock infused sound of 'Had Enough (Little Sentinels)' offers a true rough and gritty rock edge to the album. 'Nightlight & Hindsight (The Fugitive)' follows as an incredibly honest and beautifully emotive song, reflected in guitar and growing with drums throughout into a brilliant instrumental and harmonised section to end the track.
'Glue' is another emotive track, with keys and harmonies added to the layers. Jamie's percussive guitar playing in - my favourite track from the album - 'Risen From The Sea' and 'Back Home' is reminiscent of John Smith and the adopted style of Ben Howard. Both honest tracks and alternative folk at its best.
'Raise The Dead' has a rock infused sound, a longer track but has so much to offer and doesn't get boring like some can. 'Catherine, John and Michael' is a darker, more atmospheric track with stunning melodic vocals over the top. 'The Cycle' is a funk infused folk track, with gritty guitars and rock elements, I can imagine it being incredible live, allowing the audience to really get involved. The album closes with 'Of The Cruel', headed by classical guitar, a beautiful, powerful and equally haunting track to close this wonderful release with.