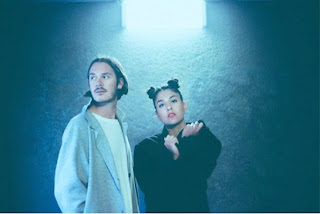 MAASAI are Stockholm-based duo, Dominique Teymouri and Zackarias Ekelund. They met each other between music projects and soon realised they should join forces. They released two tracks, 'The Healer' and 'Forgive Me', giving their captive audience something to hold on to while waiting for their debut album. The follow up track 'Collide' was then announced as the lead track from the album, 'Feeling Blue, Seeing Orange' and has gone on to be released and gain support from their supporters, press and anyone else who listens. We caught up with Dominique and Zackarias for a Q&A...

1. How old were you when you started getting involved in music and how?
Z: I started playing drums at the music school when I was about 8 years old. Before that I was drumming on everything I could get a hold on, buckets, pans and sometimes even my smaller brothers.
D: It's very cliché, but I've been singing ever since I can remember. I think I was about five years old when my parents bought me a little toy synth. One that synth I wrote my first tunes and melodies.

2. What is the most inspiring musical performance you've ever seen?
D: Björk at the Hollywood Bowl.
Z: It must have been when I saw Sting live. I had a front row seat and the gig was just pure magic.

3. Who have you been listening to lately?
Z: Multi-Love by Unknown Mortal Orchestra. Just a great album in my opinion.
D: Kelela!

1. Which three countries would you most like to tour and why?
1. Japan - It has beautiful nature surroundings, and the sushi of course!
2. US - The American music scene is huge and embraces all sorts of genres.
3. Australia - Sunshine!

2. How / why did your name 'MAASAI' come about?
For us MAASAI is a metaphor for solidarity. We wanted to choose a name that represents our values.

3. What track from your debut album 'Feeling Blue, Seeing Orange', means the most to you and why?
D: Every track on the album has it's own story and mean just as much to me as the other so I can't pick only one.
Z: Lighthouse - It's heavy like bricks, and also very fun playing live.

If you could go to the moon, which song would you play first and why?
Z: I would probably do the moon walk straight up. It's so hard to sing without oxygen!
D: Haha, I would probably by instinct sing the Frank Sinatra versions of Fly Me To The Moon.

'Feeling Blue, Seeing Orange' Album Review:
'Feeling Blue, Seeing Orange' is one of my favourite albums I've listened to in the past few months. Starting with an intense and atmospheric soundscape, 'Nairobi', offers an instrumental intro to the release. 'Forgive Me' follows on perfectly, contrasting the slow, smooth strings and vocals against the skipping keys and upbeat drums, making it stand out as a highlight of mine from the album. The lead track, 'Collide', is another favourite of mine, it's both lyrically and musically powerful and is a track I'd happily play over and over again.
'Memories' is another memorable and wonderfully melodic song, with the drums highlighted throughout. Whilst listening to 'Haunted' I could understand why people have been saying MAASAI's music echoes the likes of Sia and Florence + The Machine, again the drums are positioned perfectly and work together brilliantly with the other layers in the track. Another stand out track for me is 'I.D.S.H' starting with steel drums and growing into a fantastically frantic instrumentation with the intensity of Dominique's vocals laying over the top. 'Grow' shows a slightly slower and emotive side to MAASAI, however the song still grows into one of their uniquely fierce choruses. The album closes with 'The Healer' and 'Devil's Dance', both brilliant tracks and slowly fading the album out, ending with 'Lighthouse', slower again and stripped back a little more compared to the others.
Overall, a fantastic album, that I've had on repeat since the release. This fantastic duo deserve to go far, and I'm sure (and hope) this isn't the last you'll hear of Dominique and Zackarias...