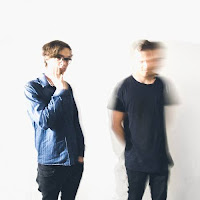 Inspired and the Sleep is a dream-pop band based in San Diego, California; consisting of a revolving line up surrounding singer-songwriter Max Greenhalgh and multi-instrumentalist Bryce Outcault. Determined on continuous reinvention, the band is moving towards a more refined and darker approach to arranging with polished production while retaining hints of Greenhalgh's previous lo-fi ponderings. The duo released their last track (and video) from their EP 'Eyelid Kid' back in January, after a year of directing from Australian filmmaker Robert Crispe, the stop-motion video for 'Die Slow' was shared with the world. They're an independent band that functions on pure DIY steam and they've got even more exciting stuff on the horizon!

1. How old were you when you started getting involved in music and how?
I picked up the bass in middle school, wasn't really sure what it was just thought I'd stand out from all the guitar players. I played in bands for years through high school until I started singing and writing / arranging my own tunes. I started to pick up more instruments as time went on. Bryce was a metal head in his young years. He was very focused on Black Metal for a while. And here we are now.

2. What is the most inspiring musical performance you've ever seen?
I got a chance to see one of my favourite artists Patrick Watson and his band at a small intimate venue in San Diego called the Loft. Bryce would probably say Cut Copy or something.

3. Who have you been listening to lately?
I have been rather obsessed with the Elliott Moss record that came out last year. And this band called Night Beds who were a folk band that turned electronic pop thing really interesting stuff.

3 Qs for Inspired & The Sleep:

1. Why / how did your name 'Inspired & The Sleep' come about?
In essence it's about polarity. 'Inspired' represents the light, energy, joy, but also anxiety. And 'Sleep' represents darkness, relaxation, depression. With both positives and negatives to each side. I was having a great deal of insomnia when the project started and I just noticed these two sides of my mental state. The 'and the' kinda puts your classic band name spin on it: Bruce Springsteen 'and the' E Street Band.

2. What process did you go through creating 'Die Slow' and how much did it differ from other tracks on your EP 'Eyelid Kid'?
'Die Slow' is rather different from the rest of the EP because the tune stayed very true to the original demo that I recorded one late night in our practice studio. The flutes on the final recording were the scratch tracks I put down. I like the imaginative story line to the lyrics. Two young childhood friends who were at one point very close and then something happened to cause one to murder the other. It's basically a metaphor to any kind of relationship gone bad.

3. The stop-motion animation music video for 'Die Slow' was a year long process, why did you choose this method for a music video and what was it like working with Australian director, Robert Crispe?
That's all Robert. I think the imagery is so inherently beautiful that it had to have take so long for him. He was living in London when I first reached out to him and over the next year he ket bouncing ideas my way, until one day it was done!

Whose record collection would you most like to listen to and why?
Frank Zappa. I can't even imagine what kinda jams that looney was bumping.

'Die Slow' Review:
'Die Slow' is a track that is fantastically easy to listen to, the contrast of bold bass and drums to light guitars and vocals is brilliantly put together. It holds a sleepy summer vibe and the music video is beautifully crafted to hone in on the imaginative and creative side of this track and project. I really love this song and have listened to it MANY times since it was released, along with the rest of the EP, which has some funk tinged tracks and more indie dream pop style songs. Mixes of upbeat, slower, but all wonderfully crafted tracks, musically and lyrically - there's also a really neat focus on bass throughout, which is a pleasant difference between a lot of the other music in the world right now. If you like Bombay Bicycle Club or Foster The People etc. - you will probably more than likely love this release...