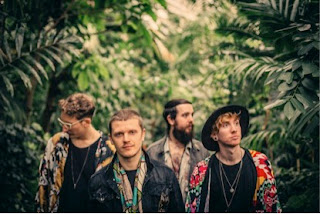 Natives are a tribal pop band from The New Forest, United Kingdom. The four-piece consists of Jack Fairbrother (guitar, keyboards), Jim Thomas (vocals), Greg Day (bass) and Andy White (drums and percussion). They return for the first time in just under two years with their first track to be taken from an ambitious concept-album that will incorporate a 20-track story and accompanying the novel. They're ready to emerge with something new and will be taking 2016 by storm, I caught up with Jack for a Q&A...

1. How old were you when you started getting involved in music and how?
I think I was around 10 when I got my first guitar. My brother and sister both played instruments and so I naturally fell into it too. I was a big Oasis fan so learning all of their songs kept me hooked.

2. What is the most inspiring musical performance you've ever seen?
I watched Empire of the Sun play a festival set in the Philippines and that really inspired me. It felt like as much a theatrical performance as a musical one, and I loved how everyone could get involved whether they'd heard the band before or not.

3. Who have you been listening to lately?
I still love the Vacationer album 'Relief', so I play that all the time. I'm also listening to the latest Panama Wedding EP and Oh Wonder a lot.

1. Where did the idea of a concept album with 20 tracks and an accompanying novel come from and where did you find your main inspirations?
We knew before we wrote any new music that we wanted to tell a story - we'd done the same thing with our first album and really enjoyed the experience.
The narrative itself was written before any of the songs, but the idea of turning it into a novel came part way through the process, we just wanted to expand on what you hear in the 3 or 4 minutes of each song.
As to the length, we didn't set out to write 20 songs, that's just how many it took to tell the story - there are 20 chapters in the book.

2. What have you found to be the best and worst thing about the project?
The best thing about the project has been our approach, namely two clear rules we set at the start:
1) Not to be influenced by any factors outside of us and Jake (co-producer) liking something. If everyone in the room liked it, we went with it, no boundaries.
2) To consider the recording a studio project, as if we're soundtracking a story, rather than thinking in terms of a band. We didn't want to let a fear of performing parts live stifle any creative ideas.
These two rules gave us so much freedom, it was a very personal and liberating experience.
The worst thing has been trying to ignore how long we were spending on the project. It's been difficult to just disappear and not worry that we were taking too long, even though in reality it's completely up to us!

3. What process did you go through creating 'Chasing Lions', was it a collective effort or did you have specific roles within the band?
It was a very collaborative effort. Andy came to us with an initial idea. He'd written a riff on guitar, transposed it to MIDI and that became the main marimba riff. He also had the drum groove.
I then described the Chasing Lions chapter of the story to everyone and together we built the song. The verse and chorus came together quite quickly but the middle 8 took a while...
Realising that vocals are as much an instrument as anything else, and therefore that changing language can have as much effect as trying a new guitar or snare drum was the big breakthrough. Once we sung the section in Swahili it all came together.
Mixing the song was also pretty fast, but mastering took a lot of back and forth with the engineer. We kept sub-conciosuly trying to change the sound with the master because we felt that it was expected, but once we realised that we'd got the sonics nailed in the mix, it all came together.

1. If you could be any animal for the day, which would you be and why?
A penguin - I like swimming and I like snow!

'Chasing Lions' Review:
The new track from Natives is the first in two years and it shows; it's a fantastic African infused pop track, they've found their sound and this release highlights tribal pop as the perfect creation for Natives. The compelling, energetic tone to this track combined with layered percussion and keys, combined with quick bursts of guitars and built up harmonised group vocals brilliantly led by Jim, brings it together as a outstanding song that I'm sure will gain a huge response and support. Get up and enjoy this one up loud!