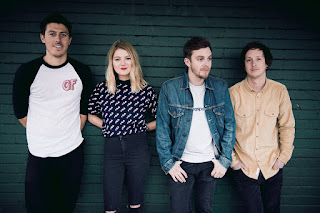 Since early 2015 the dream-pop quartet, Palms and Pelicans, have been shaking up the UK underground scene. Jack Lawrence (guitar/vocals), Mattea McKinnon (guitar/vocals), Daryl McCabe (bass) and Darren Barrett (drums) have gained eager support from the likes of BBC Introducing and BBC Radio 6. after a hugely positive response from their 2015 EP 'Sungaze', they're now back with their latest single 'Comfortable', taken from their new EP set for release this spring. They're heading for a fantastic 2016, packed with releases and touring the UK as frequently as possible; we caught up with Mattea for a Q&A...

1. How old were you when you started getting involved in music and how?
I always loved music growing up but I think I was about 9 or 10 when I really started expressing an interest in learning how to play guitar. Bands like Blink and The Offspring were huge back then and I always wanted to learn how to play their songs so I pestered my family for an electric guitar. I got one for Christmas in 2000 I think... and became absolutely obsessed with learning. Not too long after I started trying to write songs with Jack and I guess it stemmed from there really!

2. What is the most inspiring musical performance you've ever seen?
Really tough question! I saw The Stone Roses comeback show at Heaton Park in Manchester a few years ago - that was a special moment for me as I never imagined I would ever get to see them play live. Their songs are just timeless and I remember there were people of all generations at that gig - they all seem to relate to their music and that's pretty inspiring in itself.

3. Who have you been listening to lately?
I've still got the Wolf Alice debut, 'My Love Is Cool', on repeat. It's incredible and seems to get better over time. The 1975's new album is also a cracker. Stuff like The Cranberries, Chapterhouse, The Velvet Underground... these are CD's knocking around at the moment. I have no iPod cable in my car so scratched up CD's it is at the moment!

1. You're heading out on tour as much as possible this year, but where would be your dream place to perform and who would you have as your support?
We'd all love to play Brixton Academy one day. It'd be sound to have someone musically really different to play with us - like The Streets. Mike Skinner would warm everyone up a treat!

2. Who influences you musically and what inspires you lyrically?
Musically we don't consciously try to sound like anything but we do all listen to a huge range of genres, which must have an influence on the sound. Shoegaze,  pop, grunge, rock, ambient, house, folk, garage... you name it.
Lyrically - a lot of our writing comes from personal experiences.

3. What process did you go through creating 'Comfortable' and how much did it differ from the tracks on your previous EP?
To be honest the recording process took a while for 'Comfortable' as we took some time to experiment. Jack and I produced the track and recorded each section in stages. We paid a lot of attention to recording guitars and finding the best sounds. Lots of new pedals came out. We didn't necessarily want it to sound as clean and accessible as our other EP - people seem to be getting that too which is cool!

Song you wish you'd written?
This is a hard question but right now in this moment - 'Walk On The Wild Side' by Lou Reed. What a tune!

'Comfortable' Review:
'Comfortable' sits comfortably (sorry), with the previous release from Palms and Pelicans, it follows up their previous single 'Sungaze' perfectly and shows they know their sound. This track is full of energy and pieced together brilliantly; Jack and Mattea's vocals compliment each other perfectly and also manage to highlight the bass and guitars riffs and hooks throughout. The infectiously memorable bridge and chorus builds and forces this to be underground indie pop at it's best. Be prepared to see more of this band in the next 12 months...