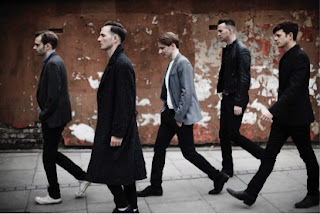 English pop / rock band from Sussex and London, The Feeling, are back with their self-titled fifth album. Dan Gillespie Sells (vocals / guitar), Richard Jones (bass), Kevin Jeremiah (guitar), Ciaran Jeremiah (keyboards) and Paul Stewart (drums) have seen a lot of success in the band's history, with many Top 10 singles, Brit award nominations and they won an Ivor Novello Award in 2007 for 'Songwriters of the Year'. This album has already gained huge support from the likes of BBC Radio 2 and having been booked for 25 festivals across Europe this summer alone, 2016 is going to continue in good stride for The Feeling.

'The Feeling' Album Review:
The album kicks off with the first single taken from the release, 'Wild Heart', it holds the well known signature sound of The Feeling true to the core of the track, with intense guitars, thrashing drums and powerful vocals, making a tune to shout along to. 'Spiralling' is much the same but different (yes it's possible), starting steadier and growing into another memorable track.
A favourite of mine from the album is 'Feel Something', with a focus on keys and the slower, honest approach to lyrics and tone of the song, the compelling vocals bring it to life even more, then it turns and builds into a track with great guitars and bass and a Bryan Adams-esque feel.
'Real Deal' and 'Non-Stop American' have slightly differing sounds to them, the first with a slight haunting hint to it, and the second being very much inspired by 70s rock, fast paced and fierce. 'Young Things' is another highlight of the album for me, with fantastic guitars, even more thrashing drums with bass and keys and rock tinged vocals. It really is pop meets rock.
'Shadow Boxer' and 'What's The Secret' focus on lyrics and really highlight the songwriting talent and musicianship of this band. The album finishes with 'Sleep Tight', a brilliant way to end the album, a rock lullaby of a kind.
Overall, this is yet another brilliant release from The Feeling, they definitely haven't lost their touch and if anything this live recording approach has brought something even fresher and exciting to their corner of the music world.