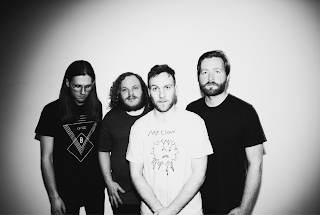 Stone Cold Fox are an indie pop/rock band from Brooklyn, NY, consisting of Kevin (vocals, guitar), Aaron (drums), Graham (synths/guitar), and Justin (synths/bass).  Their latest offering of music comes in the form of EP 'Tunnel Vision', starting off as rock songs, turning into chilled electro songs, and finishing somewhere in the middle, we caught up with Kevin to talk all things music...

1. How old were you when you started getting involved in music and how?
I was nine when I started playing guitar. My Dad had introduced me to Peter Green's Fleetwood Mac and it just blew my mind. I've been wishing I could play guitar like him ever since.

2. What is the most inspiring musical performance you've ever seen?
Richie Havens came to my town, about a year or so before his death. He was a huge influence of mine and seeing him perform really taught me a lot about stage presence. He was just such an amazing soul on stage, and he has such fury when playing the guitar. I think he broke his strings like five times haha.

3. Who have you been listening to lately?
A lot of Courtney Barnett, sometimes it's nice not to hear a synthesiser for a second haha. She's an amazing storyteller, I always wish I had the mind for that type of songwriting.

1. How / why did the name 'Stone Cold Fox' come about?
I was watching Virgin Suicides and the phrase just stuck out.

2. Which track from your EP 'Tunnel Vision' did you most enjoy creating and why did it stand out from the others?
'Firing Squad'. That one went through such a informative transformation from inception to recording while still maintaining all of it's emotional glue. It's definitely the most personal song on the album for me. Also it's super fun to play live.

If you were going to venture into any other musical genre, which would you go for?
Blues.

'Firing Squad' Review:
This is a movie soundtrack-esque track, brilliant synths compliment Kevin's vocals wonderfully, as well as the combined steady drums with stuttered guitars makes this an infectious indie pop/rock track. It's a perfect tune for singing (and shouting) along too and I can imagine it would create a fantastic vibe live!