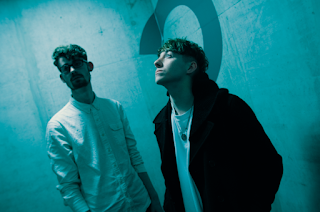 Ambient pop duo, New Atlas, is the brainchild of singer/songwriter Eoghan O'Hagan and completed by pianist Luc McParland. Recently named one of BBC Northern Ireland's hottest new acts by Huw Stephens, the band toured the UK and Ireland extensively in 2015, and following a huge response to their appearance at last year's Sound City Festival, they moved from their native Belfast and set up shop in Liverpool earlier this year. Now they're releasing their debut EP as New Atlas - 'Young Hearts', which is the product of three months locked in Eoghan's flat until he was happy with the results...

'Young Hearts EP' Review:
As their debut EP, New Atlas have done a brilliant job of honing in on a trademark sound. The release opens with the title track 'Young Hearts' which holds a deep beat, emotive lyrics presented with wonderfully raw vocals. 'In My Bones' follows on well, with moments of thrashing and crashing drums and guitars. Closing with 'The Child', again with their trademark sound, these three tracks are brilliant and Eoghan has created a brilliant sound, finished off perfectly by Luc.