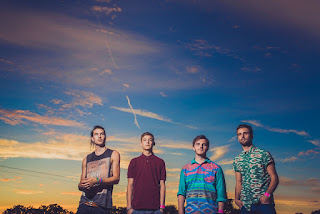 Dance a la Plage formed in February 2011 after meeting on a music practise course at Leamington Spa College. Hailing from Banbury, Oxford, this alternative, indie pop four-piece are creating sound waves that need listening to. Slice (guitars/vocals), Harry (guitars/vocals), Sully (bass) and Howard (drums) have gained support from BBC Introducing and Amazing Radio, and even bigger things are to come!

1. How old were you when you started getting involved in music and how?
Not old at all! We were about 8 or 9 when we started learning our instruments and we have always just been in bands growing up. Harry, Sully and Howard actually all went to Rock school so have been playing together for years and Slice joined them later when they met at college.

2. What is the most inspiring musical performance you've ever seen?
Ah man that's hard! There have been so many. Think it's got to be when we all went to watch Tower Of Power play at Koko, London. They were just SO damn good! We all walked away thinking 'fuck, we're doomed' haha. It definitely helped give us some direction and ideas in terms of our musicianship and live performance.

3. Who have you been listening to lately?
We've actually jut made our own playlist - (here)
There's all sorts on it from the funkiest of shit like Maceo Parker, Luther Vandross and CHIC to artists like John Mayer, Michael Jackson and Biscuits & Gravy.

1. Why / how did your name, Dance a la Plage, come about?
We were sat in our local venue called Also Know As after a show one night. At this point we were called Midas Touch, but hated the name and wanted to change it to something with a mix of languages. Our friend who was studying languages was throwing a load of suggestion at us all night and after what turned into a pretty heavy night, Dance a la Plage was the only one we could actually remember in the morning.

2. If you could play a show anywhere, where would it be and why?
I think the dream would be to eventually headline a huge festival like Coachella or Glasto. Saying that, if money was no object we'd love to throw our own huge party on a beautiful beach abroad somewhere, fly everyone over, pay for their accommodation etc. Maybe the Caribbean or some other gorgeous country. Free drinks of course!

3. When creating '222', was it a collective effort or did you have specific roles within the group?
The songwriting process varies each time we write a new song. Sometimes it's based on a lyrical idea, sometimes it's a bass line or drumbeat. Sometimes it's just a drone noise of a keyboard. Most of the time though, and for 222, it was a guitar riff. We tend to write as a collective and just let each other do their own thing.

Who in the band is most likely to survive a zombie apocalypse?
Depends, are they brain eating zombies? If so, Harry, Sully and Howard are fine - too much weed. If they are just hungry zombies looking for the biggest meal let's just they aren't going for Harry, Sully or Howard first! Either way, I suppose Slice is fucked!

'222' Review:
'222' is a brilliant indie pop rock track, perfect for seeing the summer in with, anthemic choruses that should become everyone's soundtrack to BBQ season. Infectious riffs, melodies and bass lines and a rhythm that's impossible not to tap along to, you're gonna love this!