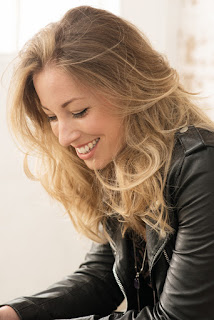 Following the release of her debut EP last year, British singer/songwriter, Lauren Ray has recently released her new single 'Drive' taken from her forthcoming debut album, 'We Will Need Courage' - out on July 1st (2016). Whilst holding down a full time job in the music industry by day, Lauren has spent the last few years performing and writing in her spare time, building a fan base in London, LA, Nashville and even further afield...

1. How old were you when you started getting involved in music and how?
I have been singing since a young age, getting involved in school choirs, concerts and musicals wherever I could. My first taste of the music industry world (in the smallest of ways) was when I was part of the BBC children's choir that sang with Martine McCutcheon for the 1999 Children In Need charity single 'Love Me'. That was a great experience as we got to record the single, be part of the video and perform live on the show. I didn't start songwriting and working towards my own music until I was a teenager but by then I knew this is what I wanted to do.

2. What is the most inspiring musical performance you've ever seen?
I went to see Emilie Nicolas perform at the intimate St Pancras Old Church venue last year and it was incredibly inspiring. The intimate setting along with her raw lyrics and strong ethereal vocals was really amazing but of course nothing beats seeing a legend like Stevie Wonder and (I'm not ashamed to say it Celine Dion) perform live where they have hit after hit and their energy and vocals are spot on throughout is really something to be in awe of.

3. Who have you been listening to lately?
At the moment I am listening to The Lumineers, KWABS, Jhene Aiko, Courtney Barnett, Honne and so many other great artists.

1. Which three countries would you most like to tour and why?
1. America because I listen to so many amazing artists from the US and whenever I am over there I always feel so inspired to create - I think it's the space.
2. Malaysia because a friend of mine has been living there for a while and has convinced me that all the music she hears in coffee shops and various places is in the same smooth adult contemporary genre that my music is in... plus it's a gorgeous place so it would be a great place to tour.
3. Australia because I've been dying to go back since I travelled there 10 years ago. Plus so many of my friends now live there or are from there so I could combine touring with travelling and with seeing good friends all the way along the coast.

2. Who have been your biggest influences musically and what have been your biggest inspirations lyrically?
Musically I can't think of one stand-along influence because I listen to so much music I imagine it all seeps in. I would say listening to artists like John Mayer, Carole King, Amos Lee, Laura Marling and Norah Jones have influenced my overall pop-country blend.
My songs are grounded more in fact than in fiction so it is my own real stories and the stories of my close friends and family that have inspired my lyrically.

3. What process did you go through creating 'Drive', and how did it differ from other tracks on your forthcoming debut album?
Each track on my album, whilst having the same producer and musicians, were all approached differently to a certain extent. The producer and I discussed what feel we wanted each song to have and with 'Drive' we just knew it was always going to be the more laid back track just because of the lyrics and message.

A lyric / quote you live by?
If the person you are speaking to is saying no, you are just speaking to the wrong person'.
I have no idea where I heard this but it has helped me over the years because pursuing a career in the music industry can be full of no's - but that just makes finding the person(s) who are saying yes that much more rewarding.

'Drive' Review:
'Drive' is a soulful, smooth and steady track, combining pop and country elements to create a chilled summer song. Lauren's gracious vocals glide over the piano and guitar led track, this sets the tone for the rest of the album teased with other single 'Come To Me'. It's clear Lauren has her own sound yet still ventures within that, I'm excited to hear more from the forthcoming album!