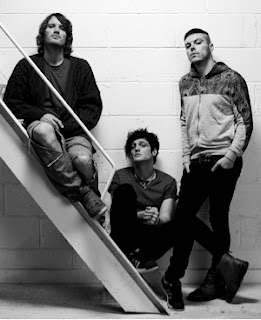 Hailing from Macclesfield, England, The Virginmarys are a three-piece rock band, consisting of Ally Dickaty (guiatar/vocals), Danny Dolan (drums) and Matt Rose (bass/vocals). They formed back in 2009 and have since toured as support to the likes of Eagles of Death Metal, Queens of the Stone Age and We Are Scientists, as well as playing their own headline gigs throughout UK, Europe, US and Japan. They released their debut album ‘King Of Conflict’ in 2013 and are now back with their latest album ‘Divides’…

1. How old were you when you started getting involved in music and how?
Matt: I've been fortunate enough to always have instruments around me pretty much from day one, so it's all my life. I had piano lessons as a kid but soon got bored. I started playing guitar at about 10-11 and that's when I started taking it seriously. It was the only thing I wanted to do and I took it round everywhere with me. I'm sure I annoyed a lot of people with that!

Danny: I grew up surrounded by drum kits from the age of seven because my Dad had always wanted to be a drummer himself and never got the opportunity and I guess he wanted me to be a drummer because of that? Anyways, I was never interested and used to bug him to get me guitar lessons which he refused... after he sold the drum kits at age 13 I think... I fell on my head and the lightbulb turned o and I went back to my Dad and said 'Dad... I want to play the drums'... Haha! When I see it written out like this it kinda reminds me of the Star Wars plot haha... Well... If Luke went bad I guess?! #darksidedrums :)

Ally: I started learning guitar when I was 11 I think. I'm a leftie but there was an old battered acoustic around the house that I learnt on so I've always stuck with playing right handed. As for getting in bands, I played in a couple in school and then pretty much dropped any further education when I met Dan as we just focused on playing music.

2. What is the most inspiring musical performance you've ever seen?
Matt: I got to see Bjork a few years back and she's just incredible. The show, the music, everything about it was inspiring. I also got to see the Beastie Boys when I was younger and that was a pretty phenomenal experience too. And also when I’ve been to see DJ’s play. The way that a great DJ can have the crowd in the palm of their hand and completely control the mood of the room when they drop into a certain tune and the atmosphere that creates. It’s proper spine tingling stuff! I’m sure there’re others but right now, they’re the ones that come to mind.
Danny: Radiohead’s Glastonbury headline show. I remember being stone cold sober (which is incredibly odd for me) and I’d never seen them live but it was the most calculated, precise and well executed show I’ve ever seen. They came on to ‘There, There’ and ended with ‘Street Spirit’. A band at the top of their craft and they knew it… and you could tell they knew it!!! The bar was set that day I think and I was like ‘Shit… that’s the level?!’ Pretty sure I ended up going back to my tent and getting completely wasted after that… but don’t remember any of that bit… good times J

Ally: Probably seeing the Flaming Lips at Reading Festival around the time Soft Bulletin came out. It changed everything in my head. They sounded so massive and it was such a show. They are incredibly sincere with the audience, it really feels like you’re part of something. It blew my mind.

3. Who have you been listening to lately?
Matt: I’ve been listening a lot to a band who are the same management company as us called Slothrust. When we were last in America we were fortunate to catch them live and they were ace.

Danny: Actually been listening a lot to Foals which is really odd for me because I’m not entirely sure I like it?! Also Wolf Alice… I definitely do like it J and The Kills new stuff… which I really think I’m gonna love! Oh and Damien Jurado!!! J

1. Which three countries would you most like to tour and why?
Matt: Brazil, New Zealand and Canada. They’re just places that have always appealed to me.

Danny: Australia, Russia and Cuba… I think they just sound like cool places to play.

Ally: We’re very lucky that we’ve got to visit so much of the world already through touring, but…
Canada is a place I’ve wanted to see since I was a kid but have never been. Something I can’t explain draws me to it. China, always wanted to go, I’d love to experience the culture and food, meet the people and visit a lot of the remaining huge parts of history. Australia, I’ve always thought that we’d go down really well in Australia and I hear so many good reports about it from friends who had moved out there.

2. Who and what have you found has influenced you to make music?
Matt: It’s always my friends and family that influence me.

Danny: Humans that make me question things and look at life in different way than I would.

Ally: Apart from having always listened to a broad range of stuff, my environment always influences me and what’s going on inside of me. Divides is very much influenced by the world as I see it in 2016, what I’m seeing, feeling and experiencing.

3. What process did you go through creating ‘For You My Love’ and how much did it differ from your other tracks on ‘Divides’?
Matt: Ally?

Danny: I seem to remember we changed the tempo quite a lot before we settled on one that felt right… and I spent probably more time with Gil Norton (producer) re-arranging the drum patterns for this than any others…

Ally: It originally started as a slow acoustic song I was writing as the rain hammered down around Christmas. I kept playing with it every time I picked up the guitar as I loved the melody but gave it more a galloping and urgent feel and then developed a chorus for it. As soon as we started playing and jamming it out as a band I got a really good feeling from it. It was a similar process to how we worked on the other songs with Gil, moving things about, cutting parts, changing rhythms. For overdubs I love playing around with harmonies and layers that add something different. We also beefed it up with a few piano notes.

Ideal Friday night?
Matt: Couple of pints and a night in watching a film and having a curry. Very rock’n’roll hey!

Ally: Headlining a huge festival. If not… I love writing, seeing my family, getting lost and disappearing.

'Motherless Land' Review:
'Motherless Land' is one of the lead tracks from The Virginmary's latest album 'Divides'. A high energy song with strong vocals leading the way, the breaks and builds allow the structure to carry the song along. It's a brilliant rock track, layered up with fantastic guitars, a neat bass line underlining the  stuttered and at times thrashing drums. It's got a catchy melody and chorus, that's bound to get everyone singing along, and I'm sure it'd create a great atmosphere live.