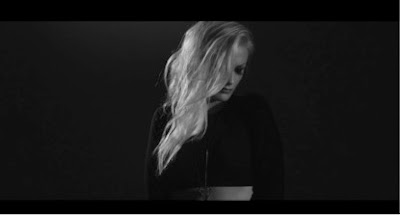 Izzy Flynn is a London / Leeds based artist, composer, pianist and vocalist. Alongside the Abstract Orchestra (an all star, hip-hop big band) Izzy has recorded and toured around the world, most recently supporting Mos Def, De La Soul and Africa Bambaataa. Now Izzy is stepping out on her solo project and is currently working on her debut EP, set to be released later this year, but for now here's some more on Izzy's debut single 'Medicine'...

1. How old were you when you started getting involved in music and how?
I was seven years old when I began learning to play the piano. My Mum and Grandmother both play. I chose not to pursue grades at a young age and instead to focus on writing music, making art to accompany it, learning a broad range of classical pieces and performing.

2. What is the most inspiring musical performance you've ever seen?
In all honesty, I haven't yet seen some of my idols, Joni Mitchell, Lauryn Hill, but I'd love to. Keith Jarrett at the Royal Festival Hall was pretty musically inspiring.

3. Who have you been listening to lately?
Most recently; Jamie Woon, James Blake, Jarryd James, Banks, soul singer Aydenne Simone, and some summery choones by Tootes & The Metals! Oh and a tonne of 90s R'n'B!

1. Having collaborated with Abstract Orchestra, what is the main thing you've found surprisingly easy / difficult going solo?
Although technically I'm a solo artist, I'm lucky enough to have a great team of managers helping me and also three extremely talented producers, plus connections with some great fashion designers, photographers and music video creatives, all will be revealed shortly!
A big difference is that I'm writing the music for my project, whereas I'm just performing in Abstract Orchestra. I absolutely love doing both projects, but I think for anyone writing their own music there is always this added level of care over your creations!

2. Where do you look to gain inspiration and influences?
I look to many things.
In a practical / musical sense I look at exploring and expanding my knowledge of harmony, and will do until I die! That can be from listening to music and working things out or learning from other musicians etc. I gain inspiration from meeting different people and from art, paining, beauty in the world.

3. What process did you go through creating 'Medicine' and how has that differed to other songs?
I think I'm always feeling around initially for chords that are juicy, dark and perhaps move in an 'unconventional' way. For example, treating the baseline as a melody and having subtle shifts in tone / mood by changing only one or two notes between chords. Lyrics and melody seem to intertwine with the chords, they all grow almost simultaneously.
More recently, however, I have been writing some more uptempo songs. Repetition is a key aspect in drawing in the listener, but it's trying to use this without songs becoming monotonous.

Where in the world would you most like to visit?
I'd love to be dropped off to an amazing beach in Jamaica, and party hard but then have a writing holiday, good friends, BBQs, me, a piano, some banana and pineapple based cocktails :)

'Medicine' Review:
'Medicine' is a dark and moody track, intense and perfectly disjointed. Izzy has managed to create a soundscape that reflects the context of the lyrics sublimely. With a catchy chorus and infectious melodies, this song represents electronic music with hints of soul at it's best, a captivating track that shows Izzy could go far as a solo act.