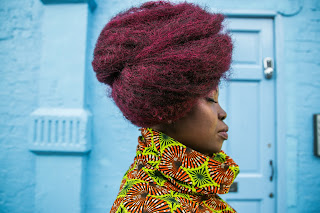 Lánre is a British singer/songwriter whose music can be described as acoustic soul / folk with captivating storytelling, influenced by her Yoruba heritage. Born in Stoke-on-Trent but spending most of her youth in Nigeria, she's grown up singing, performing live, playing guitar and soon found freedom in her own voice. In 2002, Lánre headed out on tour as a member of award-winning UK collective GK REAL, igniting her desire to pursue a solo career. Her debut album was released in 2011, followed by her critically acclaimed EP 'Home' in 2014, now Lánre's released her new EP 'Human'...

1. How old were you when you started getting involved in music and how?
I was 8 when I first experienced public performance. The journey from there to now has been a very long one.

2. What is the most inspiring music performance you've ever seen?
I saw Laura Mvula last month, what a gift!

3. Who have you been listening to lately?
I listen to 'Fink' a couple of times a week, I am also listening to Foy Vance's new release 'The Wild Swan', I listened to 'Songs From The Arc of Life' by Yo-Yo Ma & Kathryn Stott a few days ago, it's amazing.

1. What inspires your lyrically, and who influences you musically?
I am mostly inspired by poetry, prose, films, a conversation on the train. I am currently reading 'Questions for Ada' by Ijeoma Umebinyuo, her writing goes straight for your heart and I love it!

2. For people who haven't heard your music, how would you describe it in five words?
I would usually say, listen to it and make of it what you will. I try to write songs that inspire and perhaps uplift and my hope is that, the intention comes through when people listen.

3. What process did you go through creating 'Human' and how did it differ from the other tracks on the EP?
'Human' was the last song I wrote for the EP, it was originally written to be recorded as a vocal and guitar song but I was talking to my producer Feranmi Ogunseyinde about how it'd be nice to incorporate my choir background into the track, predominantly human voices and he did an amazing job of interpreting what I saw in my mind and felt in my heart.

Favourite food and why?
Oooh I love food, mostly Nigerian food. So, right now, I could do with a hot plate of jollof rice, some plantain and fish... yum!

'Human' Review:
'Human' is a stunning track, stripped back for the majority, really showcasing Lánre's emotive lyrics and powerful vocals; this song oozes soul and life, inspiring the listener. It gradually builds into a layered song with steady rhythm to tap your feet to and melodies you want to sway and dance to.