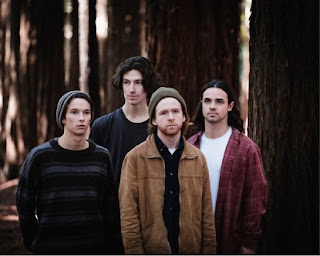 Since forming in 2014, Elk + Mammoth have established a herd of followers, performing signature blend of unpredictable humour, unusual subject matter, and mid-set-on-stage outfit chances at venues all over Melbourne. They've played with artists such as The Pierce Brothers, Slim Jeffries, and Pockets, and gained traction with the release of their single 'Fabric' in 2015. This indie rock four-piece have now released their debut EP, 'Culprit', so we caught up with drummer, Alex, for a Q&A...

1. How old were you when you started getting involved in music and how?
I started taking notice of and singing along to music that my parents had playing around the house from pretty early on. When I began incessantly tapping along, Mum suggested I put that energy to good use and so I started playing drums at 8 years old, starting my first band soon after. The first incarnation of what became Elk + Mammoth formed at high school when we were about 15-16 and jamming in the school’s music rooms at lunch.

2. What is the most inspiring musical performance you’ve ever seen?
The Melbourne band/collective called 30/70 always blow our minds, and their album launch at The Gasometer last year was like entering another world. They’re soulful, have serious groove and an admirable attitude towards music and art. I think it’s good to look up to local artists, not just in terms of musical ability and sound, but also their progress. It can be difficult to know how to tangibly follow and the footsteps of rockstars and famous artists, but you can easily follow local artists and learn from them whilst also supporting them towards bigger things. I guess, in that way that it’s not just inspiring creatively, but pragmatically too.

3. Who have you been listening to lately?
Going back and listening to guys like Charles Mingus and Sun Ra is phenomenal, as is the new stuff from Radiohead and Death Grips as well as Bowie's 'Blackstar'. Aussie bands like The Love Junkies and our good mates in Pockets always get cranked up to 11.

1. What is the biggest thing you’ve learnt about the music industry since forming in 2014?
You spend a lot of time sending emails... but also that there is an insane amount of talent in the local scene and a lot of camaraderie, which makes all that time spent emailing worth the effort to play shows, release music and share ideas with the other artists you meet.
2. Which three countries would you most like to tour and why?
The U.S. because there are so many cities with completely different audiences, Spain because I feel like it would have the best after-parties, and Japan because we want to gorge ourselves on all their amazing food and we could say that at least we’re big there.
3. What process did you go through creating ‘Shiver’ and how did it differ to the other tracks on your EP ‘Culprit’?
Shiver is a song we've had for a while, from the early days of Elk + Mammoth. It started with lyrics and a few riffs that Tim had and was slapped together during an acoustic jam in one of our bedrooms so we'd have enough material for a gig. Like a lot of our tracks though, we've pretty much completely overhauled it over the last year or so. Portrait is the only track on the EP that remains mostly as it was originally written, but it is the most recently written track as well.
Random Q:

1. Favourite pizza topping?
Given that the band is mostly vegetarian, I'd say majority rules on that one.

'Culprit EP' Review:
The EP kicks off with 'Culprit', one of my favourite tracks from the release, guitars layered up and a strong bass line pulling them together. It's a laid back track with really neat layers and tight vocals.  'Shiver' starts with stunning electric guitar complimenting the lead vocals, slowly building into a chorus with memorable lyrics and melodies, thrashing drums, a pretty funky bass line. 'Faded' follows on from 'Shiver' well, being generally more upbeat with a regular beat that forces the listener to tap along and melodies that are impossible not to hum along after listening. The release comes to a close with 'Portrait', a mellower track with a steady beat and bass line, dreamy guitar riffs and a chilled back vibe to the whole sound. I really like this EP, it offers varying aspects of indie rock and it's a good one to kick back and chill to in the sun.