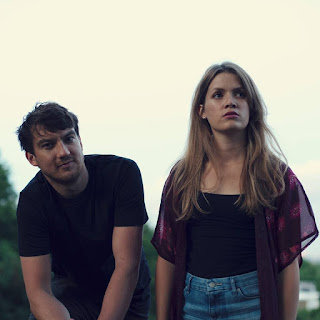 The inheritance of an old piano sparked new Scottish act Evering's first collaboration. From this inception, the duo of Chris Yendell and Dawn Coulshed have created a folk sound influenced by man into something that is their own. Their debut self-released EP 'Running Circles' received plays from BBC Introducing and Radio X's Dave Rowntree. This duo want to take you on a journey with a reflective yet 'seize the day' motive, so have no fear in joining them!

1. How old were you when you started getting involved in music and how?
We both started playing from a young age, with Dawn being involved in a more traditional Scottish music as well as the 'obligatory' high school rock band. Both of us were lucky enough to be exposed to lots of music from an early age and that's where the hunger to write and create came from.

2. What is the most inspiring musical performance you've ever seen?
Dawn: I saw Laura Marling just the other day and was blown away by her incredible vocals and strong presence.
Chris: I once got to watch the Cinematic Orchestra play alongside a full orchestra in the Royal Albert Hall. It was one of those moments where the whole two hour set seems to pass in a split second. Absolutely mesmerising.

3. Who have you been listening to lately?
We're into a lot of different music, anything from Lianne La Havas through to Californian funk band Vulfpeck. The thing that grabs us is just good quality music. Hopefully this wide influence allows us to pull ideas from a wide range of listening material in order to keep our own sound fresh and interesting.

1. How did you become 'Evering'?
Soon after we had started playing music together, we landed this magazine interview and film session appointment. The only issue was that we didn't even have a name yet! There's a street called Evering Road and Chris was lugging kit up and down it that week for a studio session. Soon enough the suggestion was made and we adopted our name.

2. What inspires you lyrically and who influences you musically?
Lyrically, there's a lot of personal material in our songs but there's also a lot of observational writing, often focused on substantial (at least to us) things in life that go un-noticed. Musically, there's a lot of slight alterations on standard chords that allow us to create the right mood to go with the story of the song, maybe this is also a by-product of our diverse music collections.

3. Which song on your EP 'Running Circles' did you most enjoy creating and why?
Probably 'Titanic'. It's only got four instruments in it but it feels almost orchestral towards the end. It was a lot of fun creating this big crescendo and there was certainly no holding back on the end vocal for this one!

If you could play a show anywhere, where would it be and why?
We'd love to play in the Wilton's Music Hall in London. It's one of the oldest music halls in the UK and it's an absolutely stunning venue. If we're thinking out of the box here though, imagine a show in the Sagrada Familia in Barcelona. It looks incredible and we can only imagine what the acoustics would be like there!

'Have No Fear' Review:
Their latest single 'Have No Fear' is a little more upbeat than the songs on Evering's debut EP 'Running Circles' and reminds me slightly of Newton Faulkner. The guitar and piano compliment each other perfectly, as do Chris and Dawn's vocals, working together to create a stunning sound overall. This song is a fantastic and shows Evering's talent both musically and lyrically.


Have No Fear - Evering (link)