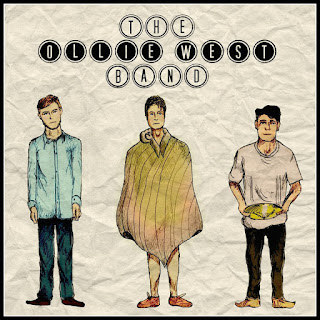 The Ollie West Band is fronted by 18 year old pianist and singer/songwriter, Ollie West. Currently studying Popular Music at the Royal Northern College of Music, his work has been recognised by established musicians such as drummer Liberty DeVitto and guitarist Dominic Miller. Alongside being the keyboard player for 'Watching Planes' and gigging solo from a young age, Ollie has fronted this band for the past two years, having gigged with them across the country, including a summer tour. The five piece consisting of Ollie, Ashely (bass), Pete (drums), Will (violin) and Tom (violin) recently released their debut single 'So Far Away' along with a B-side in the build up to an EP due later this year...

1. How old were you when you started getting involved in music and how?
I've been playing the piano since I was 7, but I didn't get really into it until I started writing music when I was 14. I had all these songs written but I hadn't gigged them, until my mates formed a band and started playing in bars round the local area and I would then do support slots at their gigs. From there I gigged solo for ages until I formed the band about two years ago, and since then we've progressed so much to where we are now.

2. What is the most inspiring musical performance you've ever seen?
For my 16th birthday I got to go see Billy Joel at the Hammersmith Apollo in London. His performance was unreal, but what really stuck with me was watching Fyfe Dangerfield, who was supporting him. It was just him and a piano, and it made me realise that what I was doing could lead to something, and that it was possible to make it.

3. Who have you been listening to lately?
I'm really enjoying Radiohead's new album 'A Moon Shaped Pool', and I've been listening to D'Angelo and the Vanguard's 'Black Messiah' a lot. I've also just been introduced to Robert Glasper by a good friend of mine, and what I've heard so far sounds awesome.

3 Qs for The Ollie West Band:

1. What inspires you lyrically and who influences you musically?
Lots of stuff inspires me lyrically, but often being outside or in big open spaces helps. It sounds stupid but it gives me room to think, and if you can clear your head and focus while outdoors it's a really great place to be mentally while writing. I've always been inspired by people like Billy Joel, Bruce Hornsby and Jamie Cullum who I can relate to as pianists and singer-songwriters, but people like Prince and Sting are massive influences on me as well.

2. Which would be your dream venue to perform at and who would be your dream act to perform alongside and why?
I think playing Madison Square Garden in NYC is a dream I want to fulfil, but I'd have to play Ronnie Scotts as well. I'm going to see Gregory Porter there in July and I can't wait. He's someone I'd love to play alongside, his charisma on stage combined with this amazing voice makes him a massive musical force and it would be awesome to sing with him.

3. What process did you go through creating 'So Far Away' and how much did it differ to the B-side 'Summer Rain'?
I started writing the music for 'So Far Away' based on this riff I'd had in my head for ages, and just sat at a keyboard with it and the rest of the music just came really quickly, which I love. The lyrics came later, based on a long distance friendship where the person does not know whether the other person is into them or not, and is begging them to 'let me know'. 'Summer Rain' was based on this pedal G chord with various extensions, and was trying to recreate the feeling of rain in the summer, being warm and constant, but not unpleasant. Again, the lyrics came later based off the one lyric I had, 'summer rain', and represents an escapism that summer rain is, at least to me. Someone saying let's pack it all in and run away into the summer rain seem quite romantic to me, plus rain in summertime is one of my favourite things in the world, hence why I wanted to record the song. Neither process was particularly different musically, but my mental approach to the lyrics in both tracks differed greatly and I guess this translated in the music.

If you could go to the moon, which song would you play first?
Definitely 'Space Oddity' by David Bowie, more for the novelty than anything else. Imagine staring at Earth from the moon, and just hearing the voice of Bowie singing 'Ground control to Major Tom' in your ear...

'So Far Away' Review:
'So Far Away' is a brilliant easy-listening track, full of jazzy piano riffs and funky bass lines. The steady drums work well with the guitars and pianos to create an infectious melody, that's pretty hard to get out of your head after listening. A combination of jazz and pop creates a brilliant track that Ollie's vocals intertwine with wonderfully. I'm looking forward to hearing more from these guys, and think their EP is something to be excited about!

So Far Away - The Ollie West Band (link)