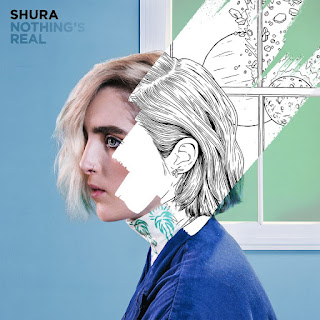 Shura is an talented singer/songwriter and producer from Manchester, England. She started playing the guitar when she was 13 years old and started recording music at 16, going on to work with producer Hiatus, being featured on six tracks on their 'Parklands' album. Shura's debut single 'Touch' gained lots of positive attention, especially from blogs, leading to 'Just Once' and 'Indecision' following as two other singles the same year. She then went on to be long listed in the BBC Sound of 2015 poll, released two more singles, an EP (in the US) and performed at festivals including Bestival, Festival No6, and Latitude. Now she's releasing her hugely anticipated debut album 'Nothing's Real'...

'Nothing's Real' Review:
'Nothing's Real' is Shura's debut album, which doesn't seem apparent on first listen, Shura has waited to create a unique and personalised sound that stands out against other indie pop and electro music currently causing waves in the world of music. There's a real mixture of songs amongst the 13 tracks on this release, including '(i)' and '(ii)', an introduction to the album and an interlude just over half way through. Two emotive and raw tracks created using a audio of old home videos and backed by wonderful soundscapes, a clever and touching aspect to the biographical theme that runs through the release.
The title track 'Nothing's Real' is the result of a panic attack and a trip to the hospital, which is apparent by the frank and honest lyrical portrayal in contrast to an upbeat track, at times intense, gritty electronic layers, and heavily 80's inspired (even a slight Ghostbusters feel to it). 'What's It Gonna Be?' the latest single from the album follows on well; it's an incredibly infectious track which is impossible not to dance or at least tap along to, and the lyrics are brought to life by the accompanying narrative of the music video perfectly.
'Touch' was the second song of Shura's I ever heard, after 'Just Once', which unfortunately didn't make it onto the album. It's easily her most popular single to date; the duality of stripped back piano sections and continuous gentle vocals with layered beats and synths make it a memorable track not just from the release, but also in the world of electronic indie pop music at the minute.
'Kids 'n' Stuff' is a generally slower track with the same honest lyrical approach that flows throughout all of Shura's work. It also has a fantastic breakdown bringing the song to a close, blending the ending with the intro to 'Indecision' flawlessly. Another popular single, and a brilliantly catchy track that is often stuck in my head.
The repetitions of 'I was never ready', from the track 'What Happened To Us?', echo alongside fantastic synths and rhythm, complimented by a groovy bass line. Similarly 'Tongue Tied', 'Make It Up', and '2Shy', fill out the release with more brilliant trademark Shura tracks.
The album finishes with 'White Light' and 'Space Tapes', two tracks that make up 20 minutes between them. Full of etheral electric guitar, upbeat and infectious riffs, rhythms and soundscapes, creating atmospheric, spacey tracks.
It's so wonderful to be able to listen to a 13 track album full of different genres, themes, pace and styles throughout, not only in the end product of sound but also inspirations and influences. Shura has a true talent for creating new and exciting music and that's apparent with this debut album!