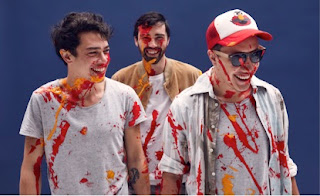 2015 was a big year for Melbourne trio, Woodlock; their EP 'Sirens', released in September, charted in the Top 50 iTunes charts and two of the singles landed on the Viral 50 Spotify Charts. Bowen (percussion), Eze (guitar / vocals), and Zech (guitar / vocals) have sold around 30,000 EPs in the last 18 months and have racked up over 4 million streams, whilst touring Australia and playing a string of festivals and supporting Elle King on her Bluesfest Sideshows. They've recently released their single 'The Only Ones', so we caught up with them for a Q&A...

1. How old were you when you started getting involved in music and how?
Zech: Eze and I come from a very musical family, so we’ve always been involved with music. Bowen I think started in high school and church.
Bowen: I asked someone “What’s the easiest instrument to learn?” They said drums and the rest is history.

2. What is the most inspiring musical performance you’ve ever seen?
Eze: Coldplay or the Paper Kites.
Zech: Definitely! Coldplay have this energy that makes you feel like you are part of a
special moment.

1. You’ve performed at some great venues / festivals and shared stages with some great musicians, but which is your dream venue and who would be your dream act to perform alongside?
​B​owen: We set the goal since we started to play with the Paper Kites, but I think we have a few, Coldplay, Paul McCartney and Kings of Leon would be a few off the top of my head.

2. What have you found to be the best and worst thing about being in a band?

E​ze: The best would be that you get to do what you love, with people you really enjoy the company of and I cant think of a worse side! No in all honesty there really isn't any thing that makes this terrible, there are things that make it hard, but we love it and its worth the times of struggle.

3. What is process did you go through creating ‘The Only Ones’ and how different was it to the tracks on your ‘Sirens’ EP?
Zech: So many ways, for one it wasn't written by Eze and I but was written by myself and Lindsay Jackson. And writing with someone new can be a scary thing. With our writing process Eze and I are very open with each other about what we want to convey and being that most of our songs are about personal moments, they're not always easy to create with strangers. I was lucky that Lindsay was such a great guy to work with and really helped me to open up my writing in a way that I never would have before.

Random Q
One unforgettable tour moment?
Bowen: Our largest show to date, and having people singing a song we have called Fortress. It's about knowing someone struggling with depression and being there for them to help through it. It sounds corny but it honestly felt like a depression breaking moment. Like people were being set free.

'The Only Ones' Review:
'The Only Ones' opens with stunning piano and vocals coupled together, gradually growing with percussion and bursting into a fantastic, infectious pop song.  The chorus is full of layered instrumental tracks, and vocals that make it impossible not to singalong to. Lyrically and melodically brilliant and perfect for summer playlists. If you're into Eliza and the Bear or The Lighthouse and the Whaler, you're bound to love Woodlock!

The Only Ones - Woodlock (link)