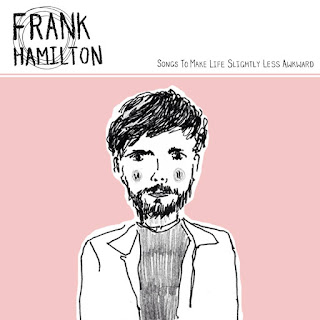 Three years after the success of his hugely popular project '#OneSongAWeek', which ended with a #1 on iTunes and featured the likes of Ed Sheeran, Newton Faulkner, Jose Vanders (Oh Wonder), and Lauren Aquilina. His track 'Flaws & Ceilings' was chosen as iTunes' Single Of The Week and became one of iTunes two most popular SOTW's in 2012 (along with Emeli Sande). His follow up EP 'Summer' went straight to #1 in the iTunes singer/songwriter charts and featured a cover of Teenage Dirtbag with Wheatus (the first and only time they've featured on a cover since the original release in 2000). He's since had two sold out headline UK tours and played the likes of The Great Escape, Secret Garden Party, and BST in Hyde Park, and most recently supported Scouting For Girls. Now Frank's back with his hugely anticipated second album 'Songs To Make Life Slightly Less Awkward'...

2. What is the most inspiring musical performance you’ve ever seen?
Probably Elvis Costello at Hyde Park. Songs for days.

3. Who have you been listening to lately?
Weezer, The Crimea, Vant, Flyte, Hudson Taylor.

1. You’ve been on many tours over the past few years, but what do you find is the best and worst thing about touring?
Best thing? Not having to make decisions. Everything's kind of planned so you can just enjoy the moment (for once). Worst thing? Coming home.

2. Where do you usually find inspiration for your music and projects?
I dunno, I like people watching and I think too much?

3. Which track from your forthcoming album ‘Songs To Make Life Less Awkward’ are you most excited / apprehensive for people to hear and why?
All of them. It's been a long time coming :)

Ideal Saturday night?
Not losing my head on a dancefloor, that's for sure.

'Songs To Make Life Slightly Less Awkward' Album Review:
I think it's fair to say the wait for album two from Frank has been well worth the wait. The album opens with 'AOTC', a slowish, acoustic stripped back track, with Frank's trademark whistling intertwined throughout and stunning vocals with female backing harmonising too. 'Lovedrug' follows on and is a fun, infectious, upbeat and very danceable song. It was probably the perfect track to release as the lead single to get everyone's attention and I think it did just that. '10 Days' is another upbeat tune with catchy hooks. Frank's reworked his older track, 'Had Enough', which has always been one of my favourites. Now he's added stuttered guitars and heavy percussion, and yet another fantastic chorus to singalong. The first track to be shared from the album, 'Songs We Fall Asleep To', bridged album one to this release perfectly, it's grown on me since the music video dropped and really is a song to get you 'through the darkest nights'. 'Saturday Night' is the second and most recent single, another memorable chorus and more catchy whistling throughout (which has genuinely been stuck in my head since the first time I heard the track); it's also got a really neat break down with layered vocals. 'Recycling' is yet to grow on me, however, it is undeniably catchy and blends Frank's acoustic sound with his newer indie pop music. 'Red' is a rockier track and has a brilliant combo of guitars and percussion throughout, the poetic play on words with lyrics really stands out in this one. His songwriting skill shines throughout the album, but in particular on 'What If', a song full of the world's unanswered questions. It's one of my favourites from the release, with mellow vocals combined with indie rock instrumentals and a verse of speech creates a brilliant structure to the track. 'We Started A Band' is an emotive track, slower and stunning harmonies create a raw atmospheric track which really stands out amongst the others, yet in a strangely subtle way. '21C' and 'The Only Cloud' are both great tracks, full of fantastic guitar riffs and drums throughout, and the latter has emotive lyrics that really stand out. The album finishes with 'More Or Less' which features Dodie Clark and is the stand out track for me and my personal favourite from the release. Frank and Dodie's vocals compliment each other so well and it's just a genuinely stunning song.