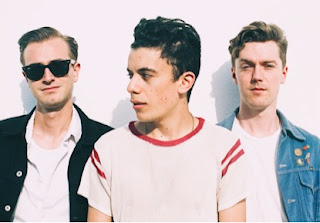 Mainland are a pop/rock group comprised of Jordan Topf (vocals/guitar), Corey Mullee (guitar/synth), and Alex Pitta (bass). They arrived in 2013 with their 'Girls Unknown' EP and followed soon after with their second independent release 'Shiner EP' in 2014. They've opened for Catfish and the Bottlemen, The Colourist, Drowners, Strange Talk (and many more), and have shared festival stages with the likes of The War On Drugs and Of Montreal. After signing to 300 Entertainment they headed to California and released their EP 'Outcast'; now they're back with 'Beggars', the first single from their debut album 'Night Trials', due out later this year...

1. How old were you when you started getting involved in music and how?
We all started front a young age. I started at age 8 listen to Michael Jackson and playing the guitar. Corey started in high school playing the blues and Alex was in marching band and a trained pianist from a young age before joining punk bands in San Diego. Then New York happened.

2. What is the most inspiring musical performance you’ve ever seen?
Two really stand out this year. The first was seeing X Ambassadors at SXSW after they had gotten of touring stadiums with Muse. They just blew me away. Also caught Courtney Barnett for free at Rough Trade in NYC after her set at Governors ball got rained out. She was so talented and her bass played crowd surfed like five milliontimes.

3. Who have you been listening to lately?
The Cars, Orange Juice, The Smiths, and a band from our label family Coast Modern.

1. What has been the biggest difference for you as a band between your forthcoming debut album ‘Night Trials’ and your debut EP ‘Girls Unknown’?
We went through a tremendous musical evolution as performers and as songwriters. Our pallets and musical tastes just diversified over the last few years in part to being in new studios and all the touring we've done has just made us a stronger unit. We recorded girls unknown in a basement with zero touring experience. I think the touring and time spent strictly on songwriting just made us grown as people.

2. You’ve shared stages with the likes of Catfish & The Bottlemen and The War On Drugs; but who is your dream act to share the stage with and why?
I think it'd be cool to tour with Lana Del Rey. She doesn't tour all that much and has created her own little world we all want to live inside. She's her own thing and no one can take that away from her. I like what Catfish and the Bottlemen are doing right now too. Rock and roll no frills.

3. What process did you go through creating ‘Beggars’, was it a collective effort or did you all have specific roles within the band?
It went through maybe ten iterations. I worked on it in LA, New York, etc. We recently went back to Austin, Texas to recut vocals and the whole band sang on the track. It was super raw and fun to finish the song. It's our baby.

1. If you could live anywhere in the world, where would it be and why?
The south of France would be magic. It's mysterious coastline would bring some vibey inspiration for the next LP.

'Beggars' Review:
'Beggars' has been on repeat since the moment I received it in my inbox, it's a genius track. A memorable chorus that I've found myself humming along to many times and a punchy tune throughout. It's reminiscent of Twenty One Pilot's latest material but still holds a unique Mainland touch. I can imagine this being the song that everyone shouts along to at their live shows and gets stuck in their head for weeks after. Lyrically empowering and musically powerful it's a brilliant pick me up song - enjoy!