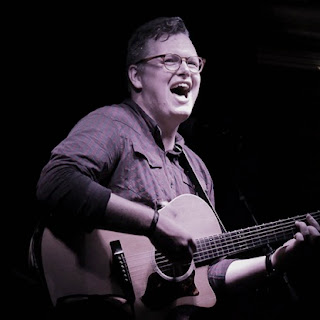 Tom Martin is a 21 year old singer/songwriter and musician from Romsey, near Southampton, currently splitting his time between home and his university city of Swansea. He began gigging as a soloist in early 2014, but the financial burden of student life prohibited Tom from recording any music of releasable quality until this summer. His debut EP 'Next Plane Out' was recently released and launched with a sold-out show at Winchester's Railway Inn...

1. How old were you when you started getting involved in music and how?
I’ve been singing for as long as I can remember – mostly wailing over the top of whatever my dad had on in the car and then sitting with sheets of lyrics learning every song the latest band or singer I was into. When I was about 12, there was a songwriting competition at school for which I teamed up with a friend of mine; he literally got me in to do the singing, that was the extent of my involvement, but we won it and after that I started writing (terrible) lyrics. Two years later, the natural progression seemed to be to pick up the guitar and eventually I played in a couple of bands, not gigging a great deal, before striking out alone just over 2 years ago.

2. What is the most inspiring musical performance you’ve ever seen?
Tough question; I’ve everything from huge bands at festivals and in arenas to solo acts in pubs, so there’s a huge stylistic chasm…I have a friend called Scott Freeman who just goes ballistic wherever he plays, just him and an acoustic guitar jumping around and screaming and totally going for it. I think there’s something quite wonderful about that will to just be the most excitable man in the room, even if there’s an audience of less than 10 people.

3. Who have you been listening to lately?
What haven’t I been listening to? An August birthday gave me a chance to get a lot of albums I’d been after for a while. Before that, I got Micheal Kiwanuka’s ‘Love and Hate’, which is without a doubt my album of the decade so far, it’s simply unbelievable. It’s like Pink Floyd doing Motown, and Kiwanuka is one of the finest songwriters around.
I could be brief but that’s not like me at all, so I suppose standouts would include the latest effort from Bears’ Den, which isn’t spectacular in its complexity but sounds incredibly warm and full, kind of an 80s-radio-rock feel. Jamie T’s latest album is a strong one too, love his lyric work and his willingness to be a rock artist while rock is so unfashionable. Tom Odell’s second album had some of the best songwriting I’ve heard in ages alongside some of the worst lyricism and production. Catfish and the Bottlemen’s Van McCann has a great way of wording stuff and a certain way with a melody that always makes them a bit of a guilty pleasure.
I’ve been loving Kanye West’s 808s & Heartbreak; I’m a recent convert to Kanye but that’s an album I’ve been meaning to get for ages, he puts across an incredible amount of emotion. I’m completely dying with anticipation for Bon Iver’s next record, his last album was the best thing I’d heard in a long time. The Last Shadow Puppets’ latest release has convinced me that maybe Alex Turner should just invite Miles Kane into Arctic Monkeys and just make that kind of music forever; some of ‘Everything You’ve Come To Expect’ was just astonishing.

1. You’ve played a string of live dates across the summer, but where would you most like to perform and alongside whom?
I think the Union Chapel in London always looks like an incredible venue to play in, I love those sorts of places where it’s intimate and you can really connect with an audience. Maybe the Royal Albert Hall as well, which I really, really want to go see someone play at some time in the future. As for playing alongside someone, I think maybe if Alex Turner did another acoustic album we could team up for a gig somewhere like that, or perhaps the aforementioned Micheal Kiwanuka, who I’m just a huge, huge fan of.

2. What inspires you lyrically and who influences you musically?
It honestly depends on what I’ve been listening to at the time. I’ve taken a real love of writing soul tunes over the last year or so, just because you can be so versatile with chord use and texture. I think people like Paolo Nutini and Kiwanuka have influenced that, but there’s a night at Sin City (a club in Swansea) where they play just soul, funk, disco and R&B all night and honestly, going and getting drunk there with my uni mates every week has been as much of an influence as anything, which I know is a shockingly childish way to be influenced. Lyrically, I just love to be a big old show off; I love Alex Turner’s lyrics, I love Jamie T’s lyrics, I’m always wanting to write like them, the latter particularly. I think it shows in the EP that my influences are in that direction, certainly from the lyrics, but I’m always trying to push my work towards that AT level of poeticism; I’m not there yet though.

3. Which track from your debut EP ‘Next Plane Out’ is your favourite and why does it stand out to you?
'When She Holds You', and by a distance. I think the lyrics are a bit clumsy here and there but they really put across a lot of emotion, and I think the strength is in the arrangement of it. It’s such a BIG sound for a guy who normally performs on his own. I’m chuffed with the solo in it and just the lead guitar work in general, which isn’t my strongest suit, and I like to think that people get a lump in their throat at some point in the song the way I did when I knew we’d got the right mix for it; it’s got that big, synth-based 80s-rock sound that I like without really sounding like anything you’d hear on a day-to-day basis. It’s my proudest piece of work as a musician to date; I have to thank my mate Dino, who arranged it with me, and my recording engineer Kevin, who did such a great job putting it together.

1. If you could open a venue, what would you call it, where would it be and what would the opening event be?
I’d probably open it in my hometown, Romsey, because there’s no dedicated venue here, and call it The Teorstan, after the Saxon name for the river that runs through our town (and also the name of a cracking honeycomb ice-cream my Mum makes, I think she’d have to do the food there). I’d love to have a big room for bands and a smaller area for acoustic acts and more chilled stuff, and then for the opening event I’d have a big old party with all the best musicians from Romsey, Southampton, Winchester and the surrounding area; I love the local scene in the south of England so you could really put on a hell of a night.

'Next Plane Out' EP Review:
The EP opens with title track 'Next Plane Out', it's a soulful track, with Tom's wonderful vocals presenting his beautifully written lyrics alongside some fantastic guitar. This is currently my favourite track from the release, as the layers of instrumental tracks and vocals are brought together perfectly. 'Super Magnet' follows on smoothly and is a little more stripped back, it's catchy and yet another brilliantly written song, both musically and lyrically. The EP finishes with 'When She Holds You', it's got a solid punch to it, and it's an incredibly powerful song. With a steady rhythm, dark bass line, and gentle guitar piecing it together along with Tom's emotively sung lyrics, it's another highlight from the EP. Tom's added two non-explicit versions of 'Super Magnet' and 'When She Holds You' to the release, but I feel like the explicit tracks add to the rawness of Tom's music. Overall, a truly fantastic EP that will be on repeat a fair few times I'm sure - if you like Charlie Simpson's original material, Paolo Nutini and Jamie T, you're bound to love Tom and his music!