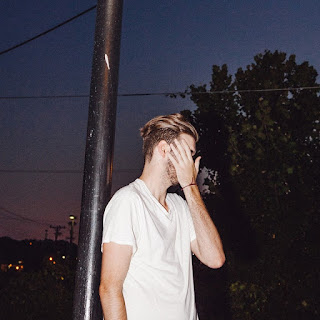 Jake McMullen is a Nashville-based songwriter, originally from Los Angeles, he relocated to Nashville to pursue his passion for songwriting as a solo artist. At only 23 years old, he’s already established himself as an accomplished songwriter, now following up his critically acclaimed EP ‘Always’, with a new release. The first single from the new EP was a cover of Robyn’s ‘Dancing On My Own’, and now he’s released the next single ‘Giving Up’.

1. How old were you when you started getting involved in music and how?
I was around 10 when I saw a friend of mine play a show in Orange County where I grew up and thought it was the coolest thing ever.  After seeing that I asked my parents for a guitar.  Been playing music ever since.


I’ve been in and out of bands and projects over the years but its probably been about 2 years now of pursuing my own thing.

2. What is the most inspiring musical performance you’ve ever seen?
At the moment I can really only recall how I recently saw Kanye perform and that was on another level. The production was so minimal but so captivating.  It was a very intentional show.  And I admire that deeply. I could go on forever about the metaphors and the meaning for me behind this whole tour he’s been on.  All that to say, it was super inspiring.

3. Who have you been listening to lately?
James Blake, Bonnie Raitt, Miles Davis and Vince Staples

1. Which three countries would you most like to tour and why?
This is a tough question for me because I feel like I really would be fine playing in any country that presented the opportunity for me to play.  But if I had to pick I’d probably say:

1. U.S. - I’ve done west coast tours and cities throughout the U.S. on small runs. But would love to be able to do a full U.S. tour soon.
2. U.K. - I’ve heard really really good things about the U.K. and admire a lot of the art that has come out of there.  Really would love to be able to head out there at some point.
3. Australia - I spent some time in Australia/New Zealand between my move from LA to Nashville.  It was one of the most beautiful places I had ever been.  Was also a super introspective time and had a lot of self-realizations while out there.  So to be able to be out there again playing music would be a dream.

2. Who influences you musically and what inspires you lyrically?
Musically I don’t think it really is a who for me.  It’s just the way I hear things and what is pleasing to my ear that influences me musically. I definitely am inspired by what I listen to which I think is only natural.  But that varies on a daily basis so for me it really just comes down to expressing the right feeling through the right sound for me. Having an idea and trying to find the right way to dress it up and present it in a way that feels right to me.

Lyrically, its mostly personal experiences. Whether that be things I am feeling, or a conversation I had with someone or whatever.  I think most if not all of my lyrics have spurred from something personal.  Its important to me to be able to play songs I have written and be able to latch on to what I am saying and live in those words.  I can tell when its forced or contrived.  And if I feel that way I know others will as well. I want to believe what I am saying.

3. What process did you go through creating ‘Giving Up’ and how much did it differ from the other tracks on your forthcoming EP?
Giving Up has served as the catalyst for everything I have been making nowadays.  I was just sitting at the piano one day and my hands played those chords.  From there I knew somewhat where to take it. I remember showing it to the producer I work with, Micah Tawlks, and feeling nervous because it was this territory I had yet to explore or not really allow myself to wander into.  But he was super responsive and encouraging of it.  I had written two songs prior to “Giving Up” that we ended up scrapping because I had put them in this weird position of trying to move forward sonically but retaining a lot of the singer-songwriter or whatever “genre” you want to call it sensibilities. And I think because of that the songs suffered.  Not that I’m not proud of the songs or anything.  I just think those songs weren’t necessarily right for what was going to be next.  But I do think they led me to finding “Giving Up” the music I am now and realizing there is no box or set of rules to stay inside when making music or art for that matter.

1. What is one thing you wish you’d never given up and one thing you wish you could give up?
For a long time in my life, I was juggling both baseball and music.  I just couldn't keep up with both because of the time they each take.  Clearly I chose what I truly passionate about, but I wish there was a way to still be playing baseball on a regular basis.

As for the thing I would give up, while I realize the necessity of social media and the benefit it plays with getting my music out there, I do wish I could give it up, even temporarily.  I find times when I just want to rid myself of the noise and distraction that it adds to life.

'Giving Up' Review:
'Giving Up' is a powerful track with droning bass, keys, a steady and solid beat throughout, with the addition of seemingly simplistic guitar. Layering up to create a stunning soundscape, reminding the listener of the latest Bon Iver release but being just far enough that it proves Jake to be a talented musician in his own right. Jake's vocals are warm and unique and bring the honest lyrics to life, showing a true vulnerability via his music. From listening to his 'Dancing On My Own' cover and now this original track, I'm excited for this forthcoming release...