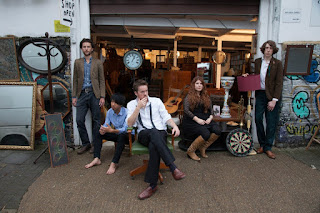 Patch & The Giant are a dynamic troupe of musicians who have fast become a genuine force within the UK alt-folk scene. Since releasing their debut EP 'The Boatswain's Refuge' in 2013 they've gained National radio support from BBC Radio 2, BBC Radio 6 and Amazing Radio, loyal support from the blog community and have recorded sessions with the likes of Bob Harris, Bandstand Busking, Songs From The Shed, Sofar Sounds and many more. They've also been winning over crowds on the festival circuit, playing everywhere from Green Man Festival, Secret Garden Party, Cambridge Folk Festival, to Wilderness, BoomTown Fair and Standon Calling amongst others. They've supported some incredible artists and performed at some of London's most iconic venues. Now they release their first single from their upcoming album 'All That We Had, We Stole', due for release on 10th February 2017...

1. How old were you when you started getting involved in music and how?
Luke: Music has always been a big part of my life but it wasn't until I was 19 that I actually had any interest in learning an instrument.
Angie: Probably the recorder aged 5... but I started learning properly when I picked up a cornet aged 8 (brass, not ice cream) which I then went on to study at university. I spent most of my teenage years and early twenties playing in various brass bands around England and Wales.
Gabriel: 14, drumming with bagpipes.
Nick: I started playing the drums when I washout 11. I was in the school choir too, although they nearly wouldn't let me in because my singing was bad.
Derek: 10, playing the piano

2. What is the most inspiring musical performance you've ever seen?
Luke: I saw a Beatles tribute band when I was 15. They blew my mind. Although they looked nothing like the Beatles.
Angie: Torn between Beirut at End of The Road in 2011 and an insane performance of Carina Burana at the Royal Albert Hall when I was 14!
Gabriel: Mono
Nick: Herbie Hancock and friends at the Barbican, playing with the L.S.O.
Derek: Nils Frahm

3. Who have you been listening to lately?
Luke: Lots of Nick Cave. It makes me sad to wake up each day knowing that I'll never be able to write a song like him. The guy's a genius!
Angie: Michael Kiwanuka (because I do everything Nick tells me to... but I can at least spell that artist's name) and Godspeed You! Black Emperor
Gabriel: King Creosote
Nick: Michael Kiwanuka, Andrew Butler and Keaton Henson's new album...

1. How did your name 'Patch & The Giant' come about?
Welsh mythology.
The story of Patch and the Giant was told to greedy Welsh school kids to make them less greedy. Especially around Christmas. **

** we tend to embellish this one when we get asked this question...

2. You've been winning over crowds on the festival circuit and on headline tours, but which three venues/festivals would you most like to perform at and why?
1. Royal Albert Hall, just because...
2. Green Man Festival Main Stage, this festival is close to our hearts and having played there for three years running on the smallest on pedal and solar power stages... we'd love to get to make it up the main stage some day.
3. Woodstock... do we even have to answer why?

3. What process did you go through creating 'Flowers' and how has it differed from the other tracks from your forthcoming album 'All That We Had, We Stole'?
Luke: 'Flowers' originally started off as a completely different song many moons ago. For whatever reason we stopped playing it. In fact I think we only played it once. However the melody stuck with me so we ended up re-writing it and it turned into 'Flowers'. I think it's important in the song writing process to not throw anything away.

'Flowers' Review:
'Flowers' is a stunning song with a fantastic arrangement to really bring Patch & The Giant's sound to life. Wonderful warm harmonies presenting the emotive and poetic lyrics and the built up strings and guitars grow into a brilliantly powerful and upbeat alt-folk section. There's so much passion in this song, shown in varying ways and I'm really excited to see what their forthcoming album has to offer.