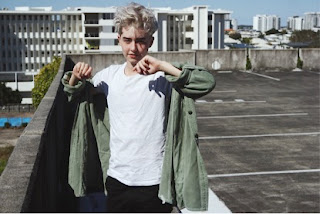 Taylor Payne is a prolific songwriter from the Sunshine Coast and has recently released her second single 'The Jungle Talks'. After releasing her first single 'Outsider' in 2015 along with a colourful music video, Taylor received national airplay across Australia as well as the US. The track reached listeners around the globe from it's feature on Spotify's The Indie Mixtape playlist...

1. How old were you when you started getting involved in music and how?
I started piano when I was 4 or 5. I don't remember why, I just remember being there in that first piano lesson and thinking it was pretty cool. Eventually I started to pick up other instruments too, but piano was the starting point.

2. What is the most inspiring musical performance you've ever seen?
It was only just 2 months ago, I went to Sydney to see The Cure. I was concerned I'd never get to see them live, so when I heard they were coming to Australia I made them my priority - no matter the cost. It was completely worth it, from the moment they stepped out on stage. Robert Smith (front man) took a minute to observe everyone, then started to sing for the next 3 magical hours. It was surreal for me and perhaps for him too. I honestly have no words for it. It's something that I've been building up anticipation for over the years and I didn't want their show to end.

3. Who have you been listening to lately?
A bit of everything, as always. Daughter has been on repeat for at least a week now. I love their sound, it always transports me to a better place.

1. Which three countries would you most like to tour and why?
Definitely in Europe, I've never been there before. America also looks pretty damn exciting. It would be really great to tour Australia some time as well, it is my home country after all.

2. Where would you like you and your music to be in three years time?
I am working on getting a band together so that I can actually do what my body tells me to do on stage, instead of being confined to the space of my piano. Would love to be touring, feeling that energy bouncing between the people and the music. I have a tonne of songs that I'm working on too, organising on to different albums and reorganising again, so I'm itching to release an EP next year. We'll see.

3. How much did the creative process for your latest single 'The Jungle Talks' differ to your first, 'Outsider'?
Other than the fact that I wrote them both about 5 years apart, not much. I was in a pretty similar state of mind whilst recording 'Outsider' as I was for 'The Jungle Talks'.

Three albums everyone should listen to?
Under Great White Northern Lights (Live) - The White Stripes
Bloodflowers - The Cure
Highly Evolved - The Vines

'The Jungle Talks' Review:
'The Jungle Talks' defines dark-pop. It's a brilliantly bold track with intense layered beats, building synths and an incredibly catchy chorus. Taylor's vocals offer a hazy atmosphere to not only the track, but also the almost poetic lyrics. The video also accompanies the song and brings it to visual life and really showing the song's story and character well. If you're a fan of The Cure or SOAK, you're bound to love Taylor Payne's music.